The Metzger Winter Classic was the first OSCF Championship Qualifier hosted in the School’s history.  The tournament brought in players from near and far.  Over 90 players represented the regions of Salem, Aumsville, Albany, Corvallis, Portland, Tigard, Lake Oswego, Tualatin, Sherwood, Beaverton & Newberg.  Overall it was a fantastic event that brought some great learning opportunities to help prepare the players for Seaside.

As the players arrived they were greeted with a pack of Smarties to help fuel their brains for actions.  Five divisions battled it out for some unprecedented results.  When Round 1 started, fifteen players experienced tournament action for the first time!  By the time round 3 rolled around, the Tournament Director and School Physical Education Teacher, Jeff Risher, had 70 players from the Novice and Intermediate sections doing Jumping Jacks before the round began.  The exercise helped the players to get out some tournament jitters, and wake up those brain cells.

Although the final results were important to the players, one player in particular demonstrated great sportsmanship behavior at the start of the tournament.  Leo Deng from Forest Park Elementary did exactly that.  With both the Advanced and Open sections playing with an odd number of players, Risher turned to the top player in the advanced section, Leo Deng, and asked if he would be willing to play up a division.  Leo, without hesitation responded with a great attitude.  He ended up taking home a 4th place trophy, the sportsmanship award, and the Tournament MVP award.  He made a sacrifice that benefited players in 2 divisions!  That is the kind of sportsmanship that is so nice to see in competitions, Congratulations Leo!  The rest of the results from the Open 1200+ section were very close.  Taking home the 3rd place spot was Austin Nguyen from the school of Science and Technology.  Second place was Clemen Deng from West Sylvan Middle School and the Section winner with a perfect 5 for 5 was the freshman from Crescent Valley High, Matt Dalthorp.

In the Advanced section 901-1200, Jeffery Sun from Lake Grove Elementary in Lake Oswego pulled off some impressive wins and one draw that may have seemed like an underdog story to some as he was not the highest rated player in the group.  But to others that know Jeffery, they know him as being a fierce competitor and mastermind of strategy.  He has played in 146 tournament games and always plays with class and respect for his opponents.  Keshav Siddhartha from Jacob Wismer Elementary took home the 2nd place prize losing his 1st match but bouncing back and winning all 4 of his final matches.  Justin Bagoyo from Cooper Mountain placed third and Thomas Kneeland from Crescent Valley High won his Blitz tiebreaker to finish 4th and a sportsmanship award.

In the Intermediate section there were many players competing at the 601-900 level for the first time. With 30 players in this division the title wasn’t going to be claimed easily.  Two players that really caught the attention of the fans were Arjun Vijay from Laurel Ridge Middle School and Cody Tanz the hometown kid from Metzger.  The two struck the crowd by surprise early, as it was Arjun’s first tournament and a first time for Cody being rated above 600.  The two battled their way to the top as they headed to the final round winning all four of their previous matches.  This was the match that would decide the section champion.  It came down to which player had the better pawn structure.  Tanz couldn’t avoid having double-stacked pawns on the “g” and “b” files as it created an attack for Vijay.  They were the last match to finish and playing with clocks made it even more suspenseful as many fans watched Arjun Vijay Checkmate the young Cody Tanz of Metzger.  Arjun’s victory gave him a sigh of relief as he complemented Cody as being a tough player.  There’s no doubt the two will face off against each other in up coming tournaments, look out Arjun!  The final results were to be decided by a Blitz Playoff between Elias Erickson of Barnes Elementary & Alexander Pham from Forest Park, who both won their final match, tying Tanz with 4.0 points.  Pham’s experience showed as he captured the king of Erickson and Tanz taking 2nd overall.  Tanz finished with an honorable 3rd and his old teammate Erickson finished 4th.  The others that took home trophies were Michael Decker from Laurel Ridge-7th, Ashwin Datta from Jackson Elementary-6th, and Tommy Eblen from the school of Creative Science-5th.  Sportsmanship awards went to Arjun Vijay, Tommy Eblen, and Fillip Cannard-CFT. 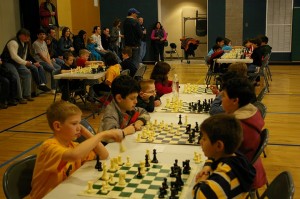 Novice Section was broken down into both A & B.  Section A featured U600 in grades K-3 and Section B featured U600 grades 4-6.  Zach Smith from Hazeldale Elementary had to win a Blitz Round to claim the 4th place prize.  The two teammates from Forest Park, Sahil Salem and Anna Rosenberg battled it out in a Blitz tiebreaker for 2nd and 3rd place.  Sahil ended up graciously winning and claiming 2nd along with the sportsmanship award, as young Anna gladly accepted the 3rd place trophy.  The big story of this section was 3rd grader Michael O’Neal from Metzger Elementary.  Michael had a perfect score of 5/5 defeating the tough Forest Park players to claim his second trophy in only 2 tournaments played.

Section B featured another close pairing as unrated Kevin Nguyen trailed his 5th round opponent from Metzger, Hunter Dietz, by only .5 a point.  Nguyen attacked early and surprised Dietz with a discovered attack that left Dietz behind early.  A checkmate soon followed and the 1st place trophy was his with 4.5 points.  In only Hunter’s first tournament of the season the 2nd place prize was surely something he was proud of, winning 4/5.  Taking 3rd was another newcomer from Antonia Crater Elementary in Newberg, Zachary Blizard.  His only lose came to Dietz in the 3rd round.  Forest Park capped off an impressive outing as another player, Randall Zhang earned the 4th place prize.