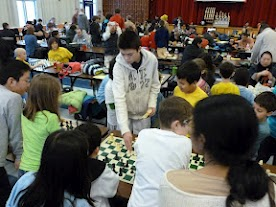 Takuma Sato-Duncan plays a simul against younger players in the skittles room between rounds.

The eighth annual Whitford-Cooper Mountain Scholastic Chess Championships on Saturday, February 25th was the largest conventional qualifier tournament in the state this year with 170 players participating in six sections. Player skills ranged from the Elite 10 USCF-rated section (average rating 1509) to the “Pawns” section with unrated Kindergartners.

Somewhat ominously, the day started with sleet, rain, some snow and blowing winds. However, Oregonians being a hardy bunch, there was only a slight delay in getting the sections running as the last few players were able to make it off snowed-in Sylvan hill and safely make their way to check in.

After the Advanced and Intermediate sections started, the younger players in the novice sections were given a pictorial run through of tournament rules, from en passant, to touch move, to how to correctly adjust a piece.

The Elite 10 had originally been planned as an Elite 8, but the 8th and 9th rated players had exactly the same rating (1455), so tournament director Rustam Kocher decided to add the 9th and 10th rated players to the section in order to solve the problem. An early start for the Elite 10 allowed them to finish their four rounds before the Intermediate sections wrapped up, indicating perhaps that some of the Elite games were played at a pace which was a little faster than anticipated or desired. The section (and the $100 prize) was won by Ashwin Sah (1531), who won all four matches on the day. Takuma Sato-Duncan won 2nd (and $50) with 2.5, while Aaron Pikus benefited from his brother’s largesse in the form of a draw in game 4 to land 3rd place with 2.5 and $30.

The Kings, on the other hand, took their time playing their rounds, and were the last section to finish. The section was won by Marshall Xu (1333) from Forest Park, with a perfect score of 5.0. Dmitri Murphy, Venkat Doddapaneni and Duncan Soiffer all earned 4.0, and landed 2nd, 3rd and 4th places based on tiebreakers. Forest Park had 25 students at the tournament, and cleaned up the team trophies, however the Kings section proved to be the exception on the day, as Stoller Middle School took first place with 8.5. Whitford was 2nd with 6.5.

In the Rooks section, Forest Park Elementary surprisingly won the team competition in a section populated largely with middle school players. The section was won by Access Academy player Kian Patel (1062), who had a perfect 5.0 on the day. Beau Hamilton (1098), who almost missed the tournament due to a balky alarm clock, ended up with 2nd on the day, and Chris Pham and Daniel Fan took 3rd & 4th, respectively. Snowy Sylvan Middle School took 2nd in the section, while Whitford took home 3rd place.

The Knights was the largest section of the day, with 41 players. Due to the large section, two players ended up with perfect scores on the day, but only Nate Hicken (856) took home the 1st place trophy. Nicholas Liskij (740) from Whitford was gracious in accepting his 2nd place despite the perfect day. Nathanial Lee and Nadia Siddiqui rounded out the top finishers with 4.0 scores on the day. Powered by Nicholas’ 5.0 score, Whitford won the team trophy for the Rooks, with a top score of 12. Forest Park earned 2nd with 10, while Robert Gray MS was hot on their heels with 9.5.

Both Novice sections were large, with many students playing in their first-ever rated tournament. The action was sometimes quick and harried, and at other times slow and introspective. As always, the best action was in the Novice rooms, since you can never tell what is going to happen next.

Forest Park won both the Bishops and the Pawns sections, and both of them by wide margins. Winterhaven landed 2nd in Pawns, while Cooper Mountain took 3rd. In Bishops, 2nd went to Franciscan Earth Montessori , while Rieke Elementary took home 3rd.

Forest Park swept the Pawns 1st-3rd: Jake Moleski, Calvin Ryu and Anna Rosenberg, with only Noah Brown from Winterhaven able to break into the top four.

In all, almost everyone seemed to have a great time, the sun eventually came out and warmed everyone up, and the Kings section parents even voluntarily helped clean up the Skittles area while they waited for the section to finish. We hope to see everyone back again next year.