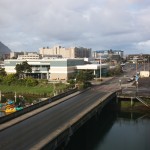 Friday morning broke partly sunny — to be expected in Seaside on a late day in April — as top Middle School and High School Chess players assembled for the first two rounds in their quest to become Oregon champion in their section and age group, as well as to become Oregon’s nominee to the national Denker and Barber Tournaments of Champions.

Early afternoon was marked by the flurry of blitz — a record number for us, at 151 — and then the evening turned to the barely contained insanity of bughouse — 28 sections, 115 teams, and 224 players — a championship record and an Oregon record.  Teams walked away with the coveted bug trophies, and tried to get to sleep before the main event starts on Saturday morning.

By 9:40 tomorrow morning, we expect 359 scholastic players to be off and running at the 10th Annual OSCF State Championship.  Hope to see you there.