Jan. 8, 2011. Corvallis. “Thirty-Five And Rainy” was a five-round chess team tournament, attracting seventeen teams from Tigard, Sheridan, Corvallis, and Pleasant Hill. In each round, four-player teams played matches against opposing teams, with match winners earning one point. The seventeen teams were divided into three sections based on average NWSRS ratings of the players. For purposes of section assignment and pairings, unrated players were assigned a working rating 50 points lower than the next strongest player on their team. 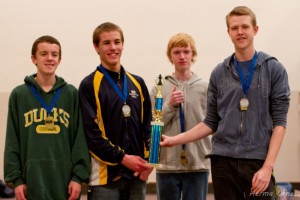 The top two seeds met in the first round and battled to a draw, with the Pleasant Hillbillies winning on boards 2 and 4 and the Mostly Awesome Team winning on boards 1 and 3.  Both teams won all their remaining matches to end tied for first and second at 4.5/5. The tie-breaker was a single G/5  bughouse game, which the Pleasant Hillbillies won  with a quick checkmate to take the crown.

The Banner Burners and Veni Vidi Vici were tied at two points going into the final round. Unfortunately, the whole Delphian squad (including the Banner Burners, two full teams in the intermediate section, and an additional player in the novice section) had to leave by 5:00, and the final round would not finish until 6:00. They forfeited the final round, leaving their fifth-round opponent — “I Don’t Think I Should Say That” — with a free point to finish at 2/5 and tie with Veni Vidi Vici, who could not overcome the firepower of The Mostly Awesome Team.  I Don’t Think I Should Say That won the bughouse tiebreaker to finish in 3rd.

The Kings were a team in limbo. They were the lowest-rated team in the section by a significant margin, but they were 160 points higher rated than the #1 seed in the Intermediate Section! They fought hard, gave the Banner Burners a scare in the fourth round, but, despite some good individual performances, they were not able to score a match win.

Individual Results
Matt Dalthorp was a perfect 5/5 on board 1 for The Mostly Awesome Team. In the final round, though, Alex Leong of gave him a scare. With Matt playing white in a wild Evans Gambit, Alex won a rook for knight out of the opening, but then let Matt get connected passed pawns in the center. Matt marched them up the board, increasing the pressure with each step forward. Eventually, Alex’s defenses cracked, and one of the pawns was able to promote.

Jack Dale was a perfect 5/5 on board 2 for the Pleasant Hillbillies. His biggest scare came in the first round against Ian Dickson of the Mostly Awesome Team. Ian had a strong advantage, but Jack kept fighting and eventually won, handing Ian his only loss of the tournament.

Leo Sun was a perfect 5/5 on board 3 for The Mostly Awesome Team. Leo, a third-grader from Hoover Elementary School in Corvallis, played on a team with three high school students. He didn’t have a scare from any of his opponents, although his final game was close until his opponent blundered a rook in the late middle game. (Update: Leo DID have a scare in the second round against Brett Horton, who was up by a few pawns, but Leo maintained his cool, shredded Brett’s kingside defenses, and eventually played Qg4#.)

Jacob Moch was also undefeated, scoring 4.5/5 on board 4 for the Pleasant Hillbillies. 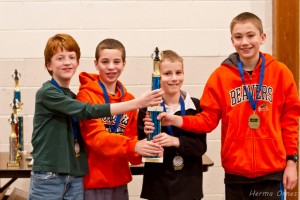 The Delphian school fielded the top two seeded teams in the Intermediate Section. The Delphian Dragons (#1 seed) won their first match was in first place through four rounds. Home team Zion King Crushers also won their first round and, after drawing in the second and third rounds, held second place after four rounds, a half point behind the Dragons (3.5/5). The Dragons and King Crushers met in the final round. The Dragons (749) were vastly higher rated than the King Crushers (611) and only needed to draw the match clinch the tournament victory. It started out well for the Dragons. On board 4, Arthur Eskandari (636) handed Christopher Cebra (486) his only loss of the day in about one minute. (Note to beginners: Scholar’s Mate can give you a quick win every once in awhile, but it if Black knows how to defend, White ends up with a lousy position.) On board 1, though, King Crusher Brian Cebra (751) notched a nearly 100 point upset over Michael Clarizio (839) to tie the match at 1-1. On board 2, King Crusher James Peterson (639) scored a nearly 200 point upset over Chad Platt (814). In the final game, King Crusher Mark Dalthorp (566) defeated JJ Gonzalez (708) to give Zion a 3-1 win in the match and first place at 4/5. Taking third place at 2.5/5 was a Cheldelin Middle School team called “We Reject Your Checkmate.” 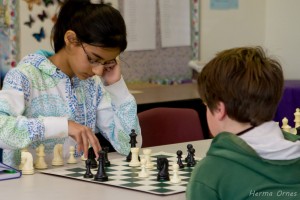 Nc8: Belle Pawar chases a rook in her 2nd round win against Trevor Wehner, a Flaming Headless Ash-Rook

One Pleasant Hill team (called “Team Name”) had only three players and had to forfeit a point on board four every round. Their board #1 player, Ricardo Marroquin (802) was among the top-rated players in the section, but on boards #2 and #3 were new beginners, Deepraj and Belle Pawar, playing in their first tournament. Ricardo played a great tournament, scoring 4/5 — tied for the best in the section. The Pawar sisters also played very well. Despite having the decked stacked strongly against them, Team Name ended up scoring two match points and placing 4th despite having only three players. Great job!

UPDATE: Full individual results can be found at NWSRS.

Novice Section
There were only five teams in the Novice Section (full results here), so every round one team sat out with a bye. However, the players on the bye teams played rated games against teammates instead of sitting idle. The games did not count in the team standings, but players all got a chance to play a fifth rated game. 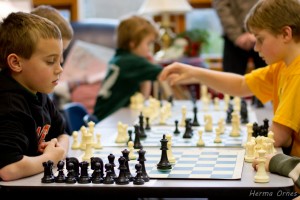 Final Round: Gameplayers vs. Mustangs

In the final round, the Gameplayers from Mountain View Elementary (Corvallis) faced the Mustangs of Metzger Elementary (Tigard) in a battle for first place. The Gameplayers won the match 4-0 and took home the gold medals.

In the meantime, the Rock Crushers got a full-point bye in the final round to move into a tie with the Mustangs for 2nd and 3rd. In the bughouse tiebreaker, the Mustangs were victorious to bring home the silver– and as an added bonus, they have a new game to teach their friends at the Metzger chess club.

UPDATE: Full individual results can be found at NWSRS.