Nancy Keller brought 18 players from Coquille — a total of 4186 kid-miles, edging out Lisa Still’s 3645 kid-miles (27 from from Corvallis). The Coquillies were also the most spirited during the awards ceremony with enthusiastic and appropriately loud support for their teammates. For all their efforts, Nancy and the Coquille squad received an Honorable Mention and trophy at the close of the awards.

Nancy also put together a nice writeup of the event from a Coquille perspective: 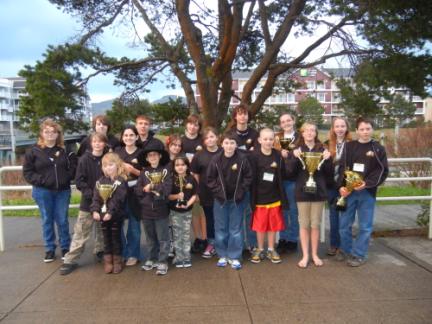 And the winners were… but wait, let us describe the event as it was not the Grammies but an event with much more importance for some of the students of Coquille.

The Seaside Oregon State Chess Federation State Tournament is a favorite for many of the players as the Seaside Convention Center is a wonderful environment, they meet and re-aquaint with friends from all over the state, they enjoy the scavenger chess problem hunt between rounds, the playing environment is friendly and professional and most importantly the trophies are HUGE and are filled with candy (for younger players, almost too heavy to hold for pictures).

Only eighteen Coquille chess players, out of the 32 invited, could attend the State Championships last weekend. The recession kept many from attending, as chaperones and finances were limited.

After completing two state team championships (CFS and OHSCTA), the Coquille Chess Club did not have enough money to sponsor all the qualified players for this last state event. Many parents could not afford a day off work, the cost of transporting, or the fee of covering their players’ food cost for the three day trip. Coach Nancy Keller could only cover a limited number of hotel rooms and main tournament registration fees. The players selected to go were based on club lunchtime attendance, after-school club attendance, tournament attendance and enthusiasm for chess. There were near tears as some players were informed they could not go. The Coquille Chess Club does thank Angelina Perkins, Sharon Ross and Amanda Davidson who were able help with transporting and chaperoning so that eighteen could go (the maximum amount that the
carpooling cars could take).

The players left early Friday morning to participate in the Friday evening side-events of Blitz and Bughouse tournaments. There were the first collection of winners as in the Blitz tournament (speed chess where each player has a limit of five minutes for their game), Jessi Ross (11th grade homeschool) won first place. In Bughouse, partners Sarai Perkins (8th grade homeschool) and Donovan Taylor-Blower (9th grade Coquille High School) snagged a first place “buggy” bughouse trophy. Per tradition, all losers had to eat worms–gummy worms.

The main event was held all day Saturday, and it was a frenzy for chaperones as there were many different divisions the Coquille players were in as ages of the players ranged from kindergarten to 10th grade. But even the youngest player for Coquille, Mackenzie Collard, quickly figured out the system of checking pairings, finding tables, playing and then recording results for the five round event. Between rounds, players had the opportunity to do the chess problem scavenger hunt, which Mason Collard won. He received a prize of chess teaching manuals. There was also “Lucky Chess” where a die roll determined which piece was to be moved, a fun variation of chess.

Once again, Coquille was noted for bringing half girls in a sport notoriously dominated by boys. Anyone who though playing a girl was easy, were quickly taught that was not the case as most of Coquille’s trophy winners were girls.

Swisslandia by Rose City Chess May 28