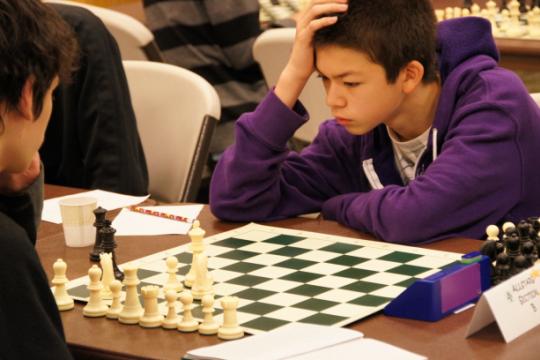 Section B champion Takuma Sato-Duncan enjoying the last few moments of his first round win.

There were no clear favorites in the B section. All were rated within 50 points of 1500. Most had played in one or several tournaments during the summer. Aaron Pikus — highest-rated player in the section and 2011 state HS champion — was fresh off good results at the Oregon Open and the Denker Tournament of High School Champions in Florida and may have been a slight favorite. Long-time All-Stars Gabe Skoro, Dhruva Chatterjee, and Jonathan Yau are always dangerous. And then there’s Takuma Sato-Duncan, Clemen Deng, and Dillon Murray, who have been playing a lot lately and improving so fast that they’re bound to be quite a bit stronger than their ratings would suggest. And finally, there’s Gavin Megson, who has for years been a key player on the powerful Clackamas high school team.

With such a wide-open field, it was no surprise to see a logjam near the top. Takuma Sato-Duncan finished clear first with 2.5/3, but only a half-point behind were Clemen Deng, Gabe Skoro, and Dillon Murray, tying for 2nd-4th at 2/4.

The dramatic final round pitted Clemen Deng and Takuma Sato-Duncan in a battle for first place on board 1. At 2/3 Clemen just needed a draw to clinch first place. Takuma would need to win (and have Gabe Skoro either lose or draw). Never shying from a pitched battle, Takuma opted for the Najdorf Sicilian in his must-win game. He deftly kept increasing the pressure in the center with threat after threat until Clemen’s defense cracked. 0-1

Clemen Deng (1512) vs. Takuma Sato-Duncan (1538)
Round 3
1. e4 c5
2. Nf3 d6
3. d4 cxd4
4. Nxd4 Nf6
5. Nc3 a6
6. Bd3 A slightly unusual spot for the bishop. At first glance it looks great: it protects the pawn on d4 and will have a great diagonal after the pawn advances to e5 some point in the future. However, it leaves the knight on d4 unprotected and is susceptible to being hit by Nd7-c4. The former is what contributes to Clemen’s troubles later in the game.
6. … b5 A typical, aggressive Najdorf kingside expansion…However, in this game the force of the move is tempered by the bishop on d3. In particular, if Black plays b4 to force the knight to move, the e-pawn is still protected. In this game White didn’t want to take any chances, though, and played a3, keeping the black pawn back.
7. a3 Bb7
8. O-O Nbd7
9. b4 White really didn’t want to take any chances! The black b-pawn is definitely not going to be able to dislodge the knight on c3. Unfortunately, this moves leaves the long diagonal very weak for White. The knights on d5 and c3 are both unprotected, but they will also be virtually pinned if Black fiancettos his bishop to g7. Black starts forming a strategic plan: “Take over the long diagonal, put pressure the knights, penetrate with rook to c4 to strike at the precarious d5 knight, win the e-pawn…”
9. … g6!
10. Be3 Bg7
11. f4 O-O
12. Qd2 White is preparing the stereotypical attack versus the kingside fiancetto. Trade off the dark squares bishops and push pawns to open tear open the pawn structure in front of the black king. But he missed a strong defense: Ng4! THe knight grabs White’s dark-squares bishop before it has a chance to confront its black counterpart. After White’s bishop is gone, Black’s power on the long diagonal will increase. Black’s position is starting to look pretty good…

12. … Ng4! The bishop is toast, and White will need to take immediate steps to shore up his weaknesses on the long diagonal.
13. Rae1 Nxe3 Uh oh…there’s no job for that rook on the e-file. Better would be Nce2 to protect the knight on d4 and prepare for evacuation of the long diagonal.
14. Qxe3 Rc8 Rc8 was a good move. The plan is to break through on the c-file, bringing rook to c4 after getting rid of the white bishop, give the boot to the d4 knight via pawn to e5, and grab the e-pawn. But perhaps even stronger would have been Qb6 to keep piling on against the knight stuck on d4.
15. Nce2 Nb6
16. f5 Nc4
17. Bxc4 Rxc4 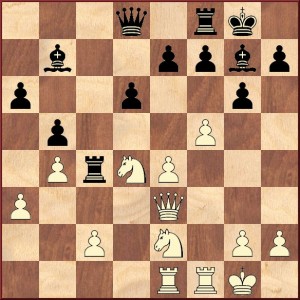 White's turn: fxg6? The f-pawn keeps Black's e-pawn back, and there's not enough time for breaking through Black's kinside pawns before Black takes over in the center. Black is in trouble no matter what, but c3 or Rd1 would have given White better chances to survive.

An excellent effort by the section B champion, Takuma Sato-Duncan.

*************************
Dillon Murray had high hopes coming into the tournament. He’d been reading chess books, watching instructional chess videos, and, most importantly, playing a lot of rated games. Studying can certainly be helpful — but only if combined with an abundance of over-the-board tournament play. He played his first NWSRS rated tournament in March 2010 and got an initial provisional rating of 1146. Over the next year or so, he played in a bunch more tournaments. The whole time, his rating stayed right around 1100. He was stuck on a plateau but kept plugging away at it until he burst through last February: 1100 turned quickly to 1200 and then 1300, 1400, and now 1500. His USCF rating has gone from just 1243 in May to nearly 1600 in October, a phenomenal increase.

Strong as he looked coming in, he nearly put himself out of contention right away with a tough first round loss. He quickly recovered, though, and scored wins in his next two games to tie for second.

His game with Dhruva in round 2 was a lively affair, with Dhruva launching a scary-looking attack. Dillon kept his cool, though, and calculated one move farther than Dillon in a critical position to win a piece for a pawn. He accurately navigated the rest of the game for the win: 0-1.

Dhruva Chatterjee (1526) vs. Dillon Murray (1465)
1. d4 Nf6
2. c4 e6 Like many rapidly improving scholastic players, Dillon has relied on sharp, attacking, gambit openings to rocket up the ratings list. One of his favorites has been the Budapest gambit, playing e5 instead of e6 on move 2, giving up the e-pawn in exchange for a wild game. After a rough first-round loss, he opted for the quieter e6.
3. g3!? d5
4. Bg2 The Catalan! Dhruva shows a willingness to sac his c-pawn to open the long diagonal. The Catalan is a double-edged opening, giving chances for both sides. It’s a tricky opening that is not common among scholastic or club players.
4. … Be7
5. Nf3 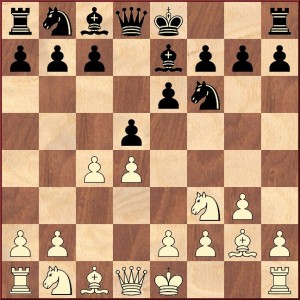 Black to move. The Catalan is popular at the highest levels, but it is a tricky opening and rare among amateurs.

Black to move. White has all sorts of threats, but the most immediate is Bxf6. If Black were to recapture, White would have Qxh7#.

15. … h6 An effective defense and the simplest. Now if Bxf6, Black simply plays hxg5, eliminating the threat. But White has other options. The black knight on c5 is the only piece protecting the bishop on b7. If the knight moves or is captured, the bishop is dead.
16. Nxe6!? At first glance, this seems to win a pawn: if the black knight captures, then BxBb7 and White is a pawn up. However, Black can win the pawn back right away and wind up with better placed pieces: E.g., after 16…Nxe6 Bxb7 17. Nxd4 exd4 18 exd4 Rc7 19. Bg2 Qxd4, Black is slightly better with pressure on White’s c- and a-pawns.
On the other hand, if the pawn captures, then White removes the b7 bishop’s guard with Bxc5, which forces a series of exchanges, resulting in a even game. To wit: 16….fxe6 17. Bxc5 Bxg2 18. Bxe7 Qxe7 19. Kxg2. White is a pawn up, but Black should be able to generate enough play to compensate. 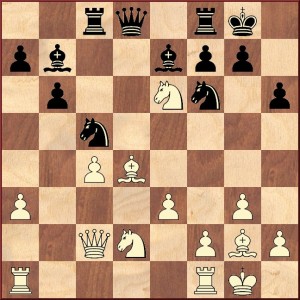 White just captured a pawn on e6, forking the black queen and rook. Should Black take the knight with his pawn or knight?