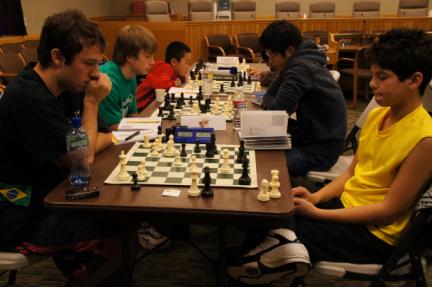 Most of Section A: Steven Witt, Matt Dalthorp, and Max Sun on the left. Ben Pikus and Austin Nguyen on the right.

On paper, it looked like it would be a battle between heavyweights Steven Witt (1817), Max Sun (1800), and Matt Dalthorp (1791) for the prizes. The winner would be the #2 rated scholastic player in the state if he scored 3/3. These three were over 200 points higher rated than the rest of field. Surely one of them would win, right? Not quite…

Elo isn’t very accurate to begin with, and it doesn’t take into account how fast active scholastic players improve when they are focused and motivated, as Austin Nguyen (1563) and Aaron Grabinsky (1559) showed by crushing the “big three” — both went 2/2 against their much higher-rated opponents. Austin added a second round win against Collin Goldman (1580) to score 3/3 and separate himself from Aaron, who only managed a draw against Collin to come in second overall with 2.5/3.

Austin’s first round victim was Matt. Matt is known for his aggressive, attacking style and love of sharp positions, so Austin tried to steer Matt’s Accelerated Dragon to relatively calm positional lines, beginning with an early Be2. It worked like a charm. Matt overextended, and Austin was able to break through in the center before Matt could safely castle. 1-0.

Austin Nguyen (1563) vs. Matt Dalthorp (1791)
Round 1
1. e4 c5
2. Nf3 Nc6
3. Nc3 g6
4. d4 cxd4
5. Nxd4 Bg7
6. Be3 Nf6
7. Be2 d5
In the standard Dragon, Black plays d6 before committing to the fiancetto with g6. The Accelerated Dragon is called “accelerated” because g6 comes before the d-pawn is moved. The d-pawn can later take the fast lane to d5 without pausing on d6 first like it has to in the Dragon. But the timing has to be just right. Matt moved it too early, and Austin found the best way to take advantage, winning a pawn out of the opening and creating substantial pressure in the center. 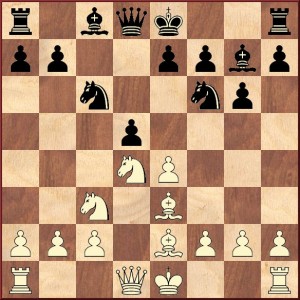 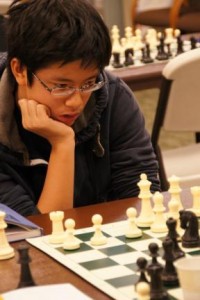 Austin Nguyen contemplating how to take advantage of Matt's impatient Ne4 in the first round.

14. Nb5! Qd8
15. Bd4 Nf6
16. c4 Bh6
Black’s queen and knight were forced back into their holes, while White’s attack gained steam. Black can’t castle now, because White could gain tempi for his attack with a3, g4, and g5 and threaten to overrun Black’s position. To gain some activity, Black plays Bh6.

Black had a choice between castling to relative safety (0-0), trying to rescue his terrible knight on a2 (Nb4), or going for the active, swashbuckling attempt to win the nearly trapped rook on f3 (Be4). Matt opted for the aggressive line. Austin responded with a nasty exchange sacrifice to rip open the center while denying Black the opportunity to castle.

White to move. White responds to the attack on his rook by sacrificing the exchange on f6 and ripping open the center, while keeping the black king stuck in the middle.

White’s attack looks overwhelming, but to finish the job, he’ll need to bring more power into the battle. The light-squares bishop would be great on the c8-h3 diagonal. It could go there immediately, but Black could then simply block the diagonal with f5. The other option would to bring the king’s rook into the game via castling and Re1. Getting that rook to the open e-file could be devastating, but it would take a few moves to get it there and move the bishop out of the way. Even so, Black wouldn’t have time to either close the file or move his king safely off it in time. In a rare inaccuracy, Austin chose the bishop move and gave Black a chance to get off the hook. 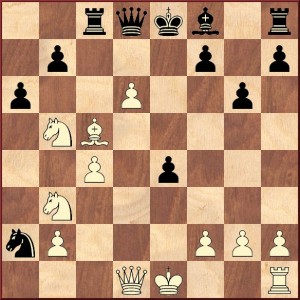 White to move. In a series of strong moves, Austin gives a seminar on how to use the queen when you have control of the center.

25. Qd4 axb5 Matt wisely takes the knight rather than move his h8 rook out of the queen’s line of attack. The knight was an powerful fighter in the attack, while the rook was not useful in the defense.
26. Qxe4+ It’s tempting to grab the rook on h8, but that would be the end of White’s attack, and he’d be two pawns down. Austin’s made a better choice — to forget about material and continue the attack with Qxe4+. 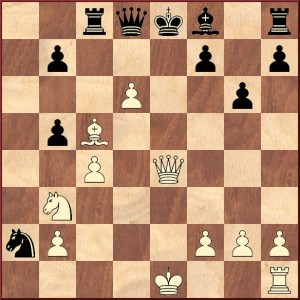 26. … Kd7 Black’s last hope for keeping the game alive was to shed some material in exchange for closing the e-file…Be7! The black king uses the white pawn as shelter from the attack. This move is hard to find any time, but when both players are down to less than a minute on their clocks, it is easy to go astray. 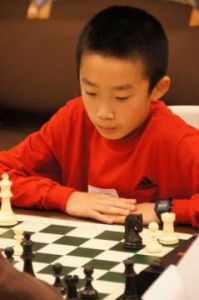 Max Sun getting ready to play the crushing Qc3+ to win Ashwin Sah's knight in the first round.

The second of the big three to fall was Steven Witt. Max Sun, who is famous for his wild gambit openings, opted for a relatively quiet, positional sideline against Steven’s Sicilian defense this time. And it paid off, as Steven lost a piece after a greedy pawn grab on move 30. From that point on, Max ruthlessly ground him down for a great second round victory.

Max Sun (1800) vs. Steven Witt (1817)
Round 2
1. e4 c5 Steven plays all kinds of openings, including the relatively quiet Caro-Kann (c6) and French (e6), as well as the typically sharper Sicilians. With 2. … c5, Steven shows he’s ready to rumble.
2. Nf3 Nc6
3. Bb5 The Rossolimo Sicilian! A somewhat surprising, quiet choice by Max, who often goes for ultra-sharp, tactical gambits in the opening. Bb5 postpones opening the center and will likely result in a trade of White’s potentially powerful attacking bishop for Black’s typically active Sicilian knight — an early indication of White’s intent to play a positional, maneuvering game. The trade gives Black a damaged pawn structure in exchange for the two bishops vs. bishop + knight. The center tends to be a bit tangled, though, so the two bishops are hard to put to good use right away.
3. … e6
4. O-O Nge7
5. c3 a6
6. Bxc6 Nxc6
7. d4 d5
8. e5 Steven tries to open the center to give his bishops some air. Max rebuffs his offer and continues with his merry maneuvering. Steven will spend the next ten or so moves trying to open lines for his pieces, and Max will go on the defensive. 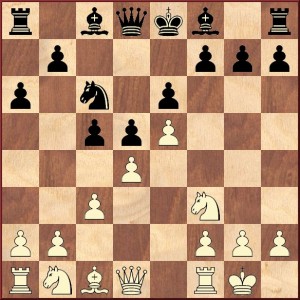 Black to move. A quiet opening. Black has the two bishops, but the center is destined to remain closed.

There aren’t many weaknesses in Black’s position…long term weak pawns at e6 and h4, and a tactical weakness with an unprotected bishop on b7. Under the right circumstances, a rook on c7, protected by the bishop on g3 would win the b7 bishop via fork on bishop and queen. Max will set up the fork and wait for an opportunity to play it. 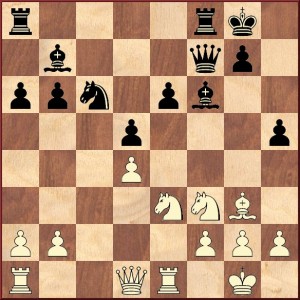 Black just played h5 to keep the e3 knight from g4. White will spend the next dozen moves shuffling his pieces back and forth, waiting for Black to make a mistake. 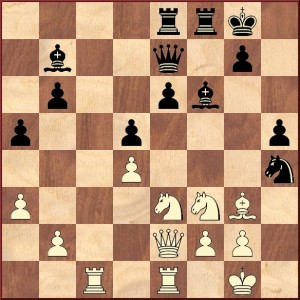 Black just grabbed a pawn on h4, leaving himself open to the fork Rc7!

Austin Nguyen vs. Max Sun
Round 3
1. d4 d5 Austin demonstrates his flexibility in the opening. After playing e4 in the first round, he switched to d4 against Max to avoid Max’s favorite wild Ruy Lopez lines.
2. c4 e6
3. Nc3 c5 With the Tarrasch variation of the queen’s gambit declined (QGD), Black takes on an isolated queen’s pawn (IQP) in exchange for easy development and lively piece play. Tarrasch (1862-1934) loved these kinds of positions, but his QGD variation has not been popular because Black often has an upward struggle to attain a draw.
4. Nf3 Nf6
5. g3 Nc6
6. cxd5 exd5
7. Bg2 Be7
8. O-O O-O
9. Bg5 Be6 [Comments by Austin Nguyen] White decides on the Rubinstein variation, which allows him maximum winning chances by targeting the “weak” d-pawn with the light squared bishop.
10. Rc1 cxd4
11. Nxd4 h6
12. Bf4 a6
13. Qd2 Qd7
14. Rfd1 Rfe8
15. Na4 Bb4
16. Qc2 Nxd4 Perhaps it was better to take the bishop on e6 earlier and set-up a dark squared blockade but my goal was to force an endgame with either no minor pieces or a winning good knight vs. bad bishop situation. White already risks a disadvantage here. 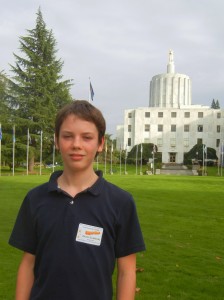 Aaron Grabinsky in front of the Capitol building.

Aaron Grabinsky from the amazing Coquille team has been playing a lot recently — and it shows. After drawing against Collin Goldman in the first round, he defeated two substantially higher-rated players, Matt Dalthorp and Steven Witt, in rounds 2 and 3. His 2.5/3 was good enough for clear second.