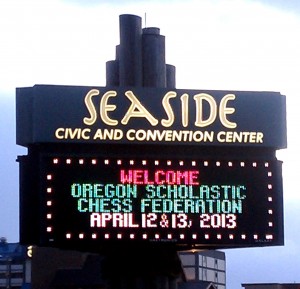 The 8th Annual OSCF State Chess Championship is coming to Seaside on April 12-13, 2013.  It’s packed full of Blitz and Bughouse on the afternoon and evening of day 1 (Friday, April 12, is an inservice day for Portland Public Schools and several other districts in the state!).

On day 2, there’s a full day of competitive chess divided into 15 separate grade- and rating- based sections that give all of the nearly 300 players a good chance to walk home with a huge taffy-filled golden trophy!

How do you qualify for State?

You qualify to come to OSCF State if you meet three requirements as of April 1, 2013 (full details here):

1) You are an Oregon-resident scholastic player in grades K-12.
2) You have an established NWSRS or USCF rating.  For most scholastic players, this means you’ve played in 15 or more NWSRS rated games — these do not have to be tournament games; you can get them in your club as well (contact us to ask about how).
3) You have played in at least two OSCF qualifier tournaments between May 1, 2012 and April 1, 2013.  The tournaments printed in green on the NWSRS calendar are the ones that count (this does not, unfortunately, include the CFS tournaments).  Qualifier Tournaments in the next month include Eugene and Coquille Tournaments this Saturday and the Presidents’ Weekend Tournament on February 16th.  Other events are being planned for early March in Gresham and Salem, and there are always the regular Friday evening Chess Odyssey and Tigard Grange Quads.

A list of the students who have qualified so far, as well as full details, hotel arrangements, and other information for this year will be posted soon.  Contact us with questions, and in the meantime, keep playing chess!