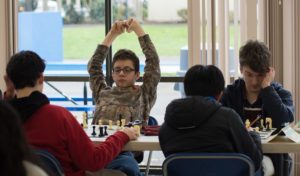 Portland Area League High School Team Chess is starting this week and NEEDS YOU!!
There are several teams competing in the Portland Area League High School Team Chess Competition that are looking for 1-2 players to fill their roster.  If you are a High School or Middle School chess player interested in trying team competition, and your school doesn’t have a team, let us know, and we will hook you up with a team!
How is Team Chess different?  First of all, it’s a lot of fun!  (Not that individual chess isn’t…)  You play on a team of 5, your team’s 5 players against another school’s 5 players, in order of rating.  If your team wins 3 or more of their 5 games, your team wins!  Great camaraderie while improving your own game.  Play once a week, at Lincoln High School, G60d5 from 4-6 PM from now until the end of February, culminating in a party of fun blitz games and a pizza party.  NWSRS rated and participation counts as one OSCF qualifier!
Contact Ed Addis at chessalot@aol.com or April Lutz at alutz@pps.net with your name, grade, school and NWSRS rating, if known, and we’ll place you on a team.