Open to students at all experience levels from Grade 2nd to 8th. Students will be grouped based on strength both for instruction and rated games. All groups receive instruction aimed at helping them reach the next rating class.

About Us
Matt Zavortink is a USCF National Master and two-time Oregon State Champion. His students recently won top individual awards at the OSCF Team Championship in both the elementary and middle-school
divisions. He offers private lessons as well as group lessons. He currently coaches at ACCESS Academy,Hayhurst Elementary, and Robert Gray Middle School.

Chess4kids will be hosting free summer classes. The class is thirty minutes long, and teachers will teach students chess strategy and tactics. At the very end, kids will be able to play an one hour long rated game with classmates. All teachers have a rating of 1600 or above.
Dates:       June 1st, 9th, 15th and 22nd
Time:         7:00 – 8:30 PM
Location:   13545 NW Evergreen st , Portland, OR 97229
Contact:     info@chess4kids.net
Register Here
This event is open to all and is FREE.  Participants do need to be familiar with the rules of chess and chess notation.  Bring chess set and chess board with you.  We will be using the Community Room which is located at the back of this New Seasons store.Each class will be about thirty minutes long where we will analyze and notate a game played by America’s first Great Chess Player – Paul Morphy.After each class, there will be a rated quad (3 chess games). Quad’s will be made up by the TD’s discretion.  Time control game in 25 minutes with a 5 second delay.  Top five scorers for the five quads and attending the Friday June 21st class will be awarded a chess book.  Tie breaks used:  Number of games played, lowest rating, and youngest age.

Each NWSRS rated quad will count as one qualifying tournament for  the 2020 OSCF State Championship.

Registration:  No on-site registration.  All must register by e-mail.  To register send Ed Addis an e-mail at “chessalot@aol.com”.  Include your first and last name, grade in school (the grade you just completed — not the one you will be in after your summer vacation), and school you attend.  For adults I need your first and last name and which state you live in.  I also need to know which dates each of you plan to attend.
Space is limited so register early.

New Seasons at Happy Valley has a very nice area for those that have brought chess players to enjoy coffee or food and of course you can always shop.  No outside food or drink can be brought into the New Seasons Market.

The Spring 2019 All-Stars List has been posted! This list consists of the players in each grade who had the highest ten established ratings, and who played rated games between January 1, 2019 and May 1, 2019.  Please carefully read the qualification rules, but if you think that you see something incorrect in the list, let us know, and we’ll check and add you if necessary.

All-Stars lists are published each trimester of the year. Any player on one or more of the winter, spring or summer lists — or on the 2019 Lifetime Achievement list (to be published next fall), or any member of the Order of the Knight who has played a NWSRS rated game between 9/1/18 and 8/31/19 — will be eligible to participate in the 2019 12th Annual Oregon All-Stars Invitational, which we plan to hold in October 2019 (details to come next September). Congratulations to everyone on the list!

Oregon Chess Federation together with Oregon Scholastic Chess Federation would like to invite all the girls to the 2019 Oregon State Girls Championship on May 25 at the Portland Chess Club. 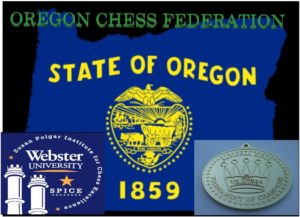 A 4 round G/55 + 5 seconds increment Swiss for Championship section.

Eligibility
Championship section open to all junior girls in Oregon State, Reserve section open Oregon residents and out of state players.
Players must be under 19 as of Jun 14, 2019.
Ratings and membership requirment

Clocks and notation required – clocks and score sheets will be provided.

Must pre-register. Registration deadline is March 15 at 5:00 PM (no registrations accepted after the deadline).

Silver Knights Chess Club Quads in Portland on May 25

Format: Players will be divided in 4 player sections (quads) by NWSRS rating;

Rating system: NWSRS and US Chess if all the players in the same quad have up to date US Chess membership will be dual rated by default (just those quads).

Schedule: Check-In: 14:20-14:25; play will start at 14:30. Each quad will operate on its own schedule; games will be started as soon as possible. Quads involving younger players are expected to finish well in advance of those involving older, more experienced players. Awards for each section will be made as soon as that section is completed.

Notation: Players are encouraged to notate; players rated over 1000 are required to notate.

Time Control: G25/5 for time delay clocks. Please bring your clock, if you have one.

The inaugural OSCF K12 School Team Championship drew approximately 200 students from across the State of Oregon for the first rated K12 team event in state history. It was the second largest rated scholastic tournament of the year, with only the OSCF Championship in Seaside drawing more students.

We’ve listened to your feedback and implemented the following changes for 2020:
Longer time controls: In 2020, the top sections in K5, K8, and K12 will move to four rounds of G60d5. The lower sections (U700, U500, etc.) will still be five rounds of G25d5.
More awards: We will have have smaller sections in each division, which means more awards.
More kids: Bad scheduling on our part made it hard for many K8 and K12 teams to attend. This year we have chosen April 4, 2020 and April 11, 2020 as the two options. These dates do not conflict with Spring Break or events at Portland Chess Club, Chess for Success, or OHSCTA. We expect enrollment to climb toward 250-300 students.
Bigger space: The event has outgrown its first venue and is actively seeking a new host.

If you are interested in hosting the event and have a venue that can serve 250-300 students plus another 200-300 adults, please email oscf@oscf.org. This venue can be a school, convention center, corporate office, or similar space. Donated corporate spaces may be tax-deductible, but inquire first. Schools who host may use the event as a fundraiser for their chess club.

The full tournament by-laws can be found here.

The 14th annual Oregon State Scholastic Chess Championship was held April 12-13 in Seaside, OR.  Over 400 players from across the state participated. Final tournament results can be found here.

With an equal score, Middle School Co-Champions (6-8) were Zoey Tang of Hope Chinese Charter School and Shunkai Peng of Conestoga Middle School. These two players then participated in a thrilling 4-game playoff with Shunkai Peng coming out victorious and earning the right to represent Oregon along with the K-8 champions of the other 49 states in the prestigious 2019 Barber Tournament of K-8 champions, Aug. 3-6 2019 in Orlando, FL.

High School Grand Champion (9-12) was Michael Moore from Crescent Valley High School who along the way scored upsets against two national masters to earn the title.  Michael earns the right to represent Oregon along with the high school champions of the other 49 states in the illustrious 2019 Denker Tournament of High School Champions, also held Aug. 3-6 2019 in conjunction with the US open tournament run by the US Chess Federation.

The Oregon Scholastic Chess Federation’s mission is to promote, support, sponsor, and coordinate scholastic chess activities in Oregon.  Our motto is “More Kids. More Chess. More fun!” Chess is a powerful vehicle for developing skills and habits that benefit young minds for life: analytic thinking, planning ahead, winning with grace and losing with dignity, setting disciplined and realistic goals, and understanding that mastery takes years of persistent work and gradual progress.  OSCF was founded by chess parents in 2005 to create opportunities for Oregon kids to compete in high-quality, rated chess tournaments. Currently, we run three official OSCF events, including the OSCF Championship in April, the Oregon All-Stars Invitational, and the Oregon Open Scholastic. In addition, OSCF sanctions around 80 tournaments per year as state championship “qualifiers.”  We also provide guidance, expertise, and resources for new tournament directors, coaches, and school chess clubs.

Emerald City Chess Club Presents the 2019 Spring Open on May 11th from 11:30 AM – 7:30 PM at Peterson Hall, Room 101 at the University of Oregon. This tournament is open to anyone, regardless of age, ability or experience!  All sections are OSCF State Championship Qualifiers.

Entry fees: Preregistered: $25 for the USCF Section and $20 for the Northwest Sections if pre-registered by May 9th. 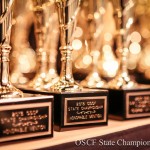