Suicide Chess
The winner is the first to lose all his or her pieces! The pieces all move just as they do in regular chess, but there are a few different rules:

Bomb Chess
Bomb chess is just like regular chess in that you win by checkmating your opponent’s king. But there is one major difference: when you capture a piece, it explodes. The force of the blast is strong enough to remove not only the captured piece from the board, but all pieces in the adjacent squares as well (including the capturing piece). The one exception is the king, which is immune to bombs and can only be captured by checkmate.

For example, suppose it is Black’s move in the following position, and the Bishop moves to capture the queen: 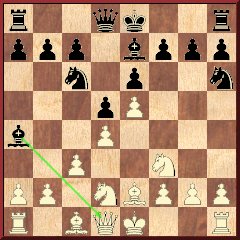 After the move, nothing remains in the queen’s square or any adjacent square–except the king, who cannot be blown up:

Ninja Chess
Ninja chess has all the same rules as regular chess, except that it is legal to cheat — as long as you don’t get caught.

You lost your rook? Not to worry! You can slip it back on the board any time you want. If your opponent doesn’t see it before his or her next move, you get to keep it. If you get caught, you have to take it back off the board.

You would be winning if your queen were on c8 instead of d8? No problem! Just slide it over when your opponent isn’t looking. If you don’t get caught, it can stay there.

Pawn Battle
Start out with just pawns and no pieces. The first one to promote a pawn wins. The pawns move exactly like they do in a regular game, e.g., they may move two squares on their first turn, they can capture en passant, etc. This game is especially useful for beginners to get used to all the rules for moving pawns and to get a feel for how pawn chains can be built or broken.