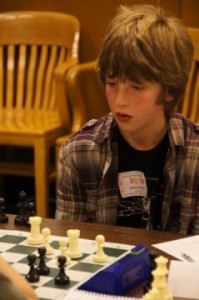 Jake Winkler and Praveer Sharan represented Oregon at the K-12 Nationals in Dallas, Texas, November 18-20. Both turned in great performances. Praveer tied for 9th place in a very strong 2nd grade section with 117 players in all. Jake was rated only 976 going into the event, but his first three opponents were rated 1600, 1547, and 1641. According to C3PO, the odds of him scoring 2.5/3 in the three games were quite a bit worse than the odds of successfully navigating an asteroid field. Jake’s attitude was, “Never tell me the odds,” as he went on to defeat his first two opponents and draw against the third. He came back to earth in the last four rounds, scoring only one more upset but finishing with an impressive 3.5/7 in the 5th grade section.