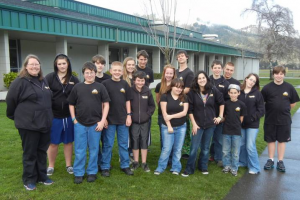 The big squad from small Coquille

There were mutterings in the hallway through the Oregon High School Chess Team State Championships. “Who is that little kid with the hat and wow is he good”, “Where is Coquille?”, “I hope we don’t have to play them!”

Coquille Junior Varsity Team had Aaron Grabinsky at their helm playing first board. Aaron has only been playing chess for 2 and half years, but has become a rising star that is catching attention in the chess community. Currently he is ranked 9th in the state of Oregon for scholastic players and he is only in 8th -grade. He may be under-rated as he is the highest ranked players (currently rated 1738) on the south coast which slows his ability to raise his rating. He needs to play higher rated players to raise his rating. He led this year’s team winning all his game in the Junior Varsity division.

Coach Keller is hoping to develop Aaron’s chess skills and get him up to a rating of 2000 considered expert level in the Chess Federation before he graduates. Even higher hopes are to get him to Master Class with a rating of 2200. She has scheduled for him and his strong teammates to attend another National event in April and to participate in the US Open in August.

Josiah Perkins was the little kid in the hat who played second board. As he is in the sixth grade which makes this Junior Varsity event new for him. He has been playing since kindergarten and is currently rated 1375. He likes to wear hats as he feels they are lucky. In another year, he may break into the top 25 scholastic players in the state of Oregon. He won four of five games during this event.

Hailey Riley, 8th grade, is the only girl on the Junior Varsity team but she has some chess power moves. She has many years of chess under her belt which has built her up to a rating of 1225. She gave solid support for the two powerhouse players on the upper boards and won four of her five games.

Kaden Johnson, 7th grade, also supplied a solid foundation for the team. Chess must run in his families genes as his brother, Devin, helped the Coquille Varsity Team become the State Varsity Co-Champions in 2010. Kaden is rated at 1121 and in a few more years he may reach his brother’s strength. Kaden won four of his five games on fourth board.

Donovan Taylor-Blower, 10th grade, was the high school player needed to make the junior varsity team eligible for this event. An enthusiastic player but still developing his chess skills, he was just shy of making the Varsity team and was placed on the Junior Varsity team. He assisted the team in getting an additional 1.5 wins.

The Coquille Varsity Team started well but when matched against Pleasant Hill, their main 3A competitor, they sustained a resounding loss of 0 to 5. They managed to beat 4A Junction City but at the end, received second place for 3A Varsity State Championships while Pleasant Hill took first. Clackamas won this years Overall Varsity Championship, tied with co-champs Willamette, Crescent Valley, and La Salle.

The Varsity Team stood out as it was a rare team with any girls and this year, but four of the five Coquille Varsity positions were girls. Jessi Ross (rated 1385), 11th grade, led on first board. 9th graders Sarai Perkins (rated 1115) and Kaitlyn Davidson (rated 1108) were on second and third board. Senior Ivy Hallmark came out of the cobwebs to give her last year of support for the Coquille Varsity team to take up fourth board and Isaiah Hill (rated 1011) was on fifth board. Isaiah supported his team dramatically with four wins earning him an All Stars Award for Varsity fifth board.

Coquille sent an Open Team this year as there were many enthusiastic Coquille chess players who have been practicing hard but did not make the Varsity Team. They showed that Coquille has sustaining strength in their reserve ranks as they tied for first place. They were Matthew Crim (rated 1065), Dane Ramirez (953), Tanner Flood (899) supported by two middle schoolers JJ Newman (847) and Zach Lathrom (474). Zach was a last minute addition as another player had cancelled. With only 2 months of practice under his belt and had just learned how to record this week, Zach put in an amazing fight to help support his team with 2 wins.

Nicole Romine, 9th grade, came as an alternate. Since all players made it and all appeared well, she was placed in the individual section. Despite being rusty at chess, she managed two wins out of five.

Saturday, March 17th, is the Coquille “Green” Chess Tournament at the Coquille High School. Adults and players of all ages and all skill levels are invited. A “pot o’ gold” (gold foiled chocolate) will be awarded to the player best dressed according to the green St. Patricks Day theme. There will be trophies (donated by Oregon First Community Credit Union) awarded to grade levels and school teams. For those elite players rated over 1000, there will be cash prizes according to rating divisions. Registration is 9 to 9:30, play goes from 10 to 5 (10 to 3 for elementary section), fee is $10. Tournament is five rounds (no elimination) and is an OSCF qualifier. Funds help the Coquille Chess Club attend State and National Events. For questions and preregistrations: Nancy Keller (541) 290-8479 or (541) 396-3855 or drnancykeller@yahoo.com.