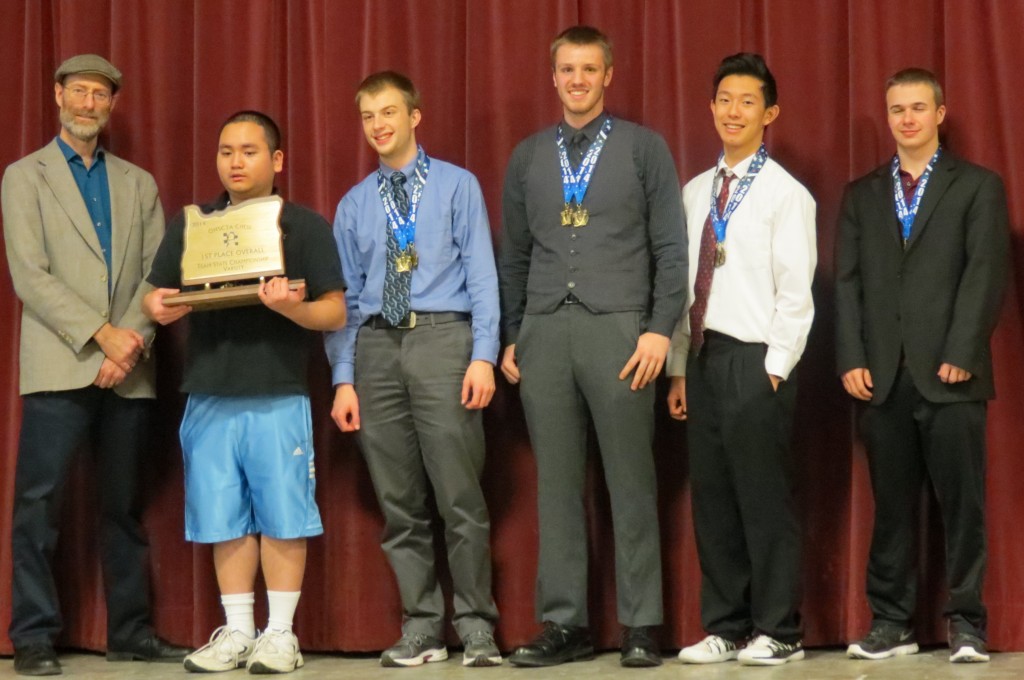 The annual Oregon high school team championships is one of the largest and most energetic and fun chess tournaments in Oregon. This year, the 51st rendition was held in the pleasant town of Myrtle Creek, Oregon, south of Roseburg and attracted 39 five-player teams representing schools from across the state.

The event had drama in spades (or perhaps in knights), capped by a decisive final game, in a decisive final match, under significant time pressure, that led to the overall championship for Crescent Valley High School.  But it wasn’t easy getting there. Read more about the entire event after the break.

At the OHSCTA State Championship, pairings are team vs. team and scoring is by match points, with teams earning 1, 0, or 1/2 point each round. Play was divided into three sections:

1. Varsity section (players are students at the high school they represent);

2. Junior Varsity section (players are students at the high school they represent or are in middle school but live in the school’s attendance area);

3. Open section (players are in middle school or high school but can be from anywhere in Oregon or Washington).

This year, the Varsity section had 16 teams. Lincoln High School (Portland) and Crescent Valley High School (CV) (Corvallis) had substantially higher average ratings than any other teams and were heavily favored to win. But, alas, Caissa is no respecter of Elo at OHSCTA, and #1 seeded Lincoln (1678) was upset in the second round by La Salle (Portland) (1315). With the exception of a third-round sweep of Willamette (Eugene), #2 seeded CV (1638) barely survived, winning their matches 3.5-1.5, 3-2, 5-0, 3-2, and 3-2. In the final round La Salle nearly pulled off its second major upset of the tournament, coming within a hair’s breadth of beating CV to win the championship, but in a time scramble in the final game of the tournament, Matt Dalthorp was able to turn a losing position against Tucker Price into a drawn position and then into a clear win in the space of a few moves to clinch the victory for CV–their third straight overall title (including a four-way tie with Clackamas,  Willamette, and La Salle in 2012). Matt finished the tournament 5-0 to win the board #3 prize. His final game in his last OHSCTA tournament was the toughest he’d played in his four appearances at the event, but since he was able to salvage the win, he finished his OHSCTA career with a perfect 20-0 score in his four appearances. Congrats on a great career record at OHSCTA! CV’s board #1 player, Yogi Saputra (2014), also finished with a perfect 5-0 this year to win the board #1 prize (on tiebreaks over Coquille’s Aaron Grabinsky (2185), who was also 5-0 but had an easier path through the tournament).

Despite losing in the second round, Lincoln was able to regroup and win their remaining matches to finish second at 4/5. Lincoln’s top two boards (Clemen Deng [1912] and Andy Trattner [1853]) were comparable in strength to those of powerhouse Crescent Valley’s top boards (Yogi Saputra [2014] and David Wen [1919]), but Lincoln benefited from tremendous depth, featuring last year’s OSCF middle school champion (Gabe Skoro, 1619) on board 4 and rising star Kian Patel (1497) on board 5, who were much stronger than any other team’s bottom boards and both finished their games with perfect 5-0 scores to win the boards #4 and #5 prizes.

After pulling off their remarkable upset against Lincoln, La Salle drew against Lake Oswego and won their fourth round match against Cottage Grove to set the stage for a winner-takes-all match against CV in the final round. In the past few years, La Salle has developed a reputation for tenacity and spectacular performances.  On paper, their Varsity team has been rated a little above the average, but each year they pull off a major upset and put themselves in the hunt for first place overall. This year, they beat the #1 seed, almost beat the #2 seed, and ended up tied for third with Lake Oswego. In 2011 they upset #2 seed Clackamas to tie for third; in 2012, they again beat Clackams (#1 seed) to tie for first; in 2013, they beat the heavily favored #2 South Eugene high school. Also, although La Salle is small school, they have a wonderfully strong and popular chess program under coaches (and chess dads) David Price and Dennis Petersen. At a time when surprisingly few schools manage to field even a single team, the relatively small La Salle has brought way more teams to the championship than any other school in the state—7 in 2013, 6 in 2012, and 3 in 2014 and in 2011.

Lake Oswego has traditionally been an Oregon chess powerhouse and were the #4 seed this year. They fell just short (2-3) of beating the much more powerful CV squad and ended up tied for third overall. They have a well-balanced team and should continue to be a contender for years to come.

The teams at the top of the cross table for the JV section have names similar to those at the top of the Varsity section, with Lincoln in first at 4.5 and La Salle in second at 4. Third place went to the Jesuit (Portland) team, which also fielded a solid varsity team.

OHSCTA has been experimenting with a middle school section the past two years. This year, only two teams showed up, so they were thrown in with the Open section to play their games. The team from Pleasant Hill middle school was utterly dominant. In putting together their perfect 5-0 match score, they went undefeated in their 25 individual games (23.5/25 with three draws). Keep an eye on this team. They are a close-knit group and have been playing together for years. Yes, they play strong chess, but they are also famous for winning awards for good sportsmanship and for being a pleasant group of kids (and parents) in general. Pleasant Hill high school is small but has a good chess program, bringing strong teams to OHSCTA year after year and usually finishing near the top of the pack (including tying for first in 2010). Second place among the middle schools was Coquille, which finished 4-0.

Full individual results can be found at NWSRS. Watch for full team and individual board results at OHSCTA.