by Nancy Keller
In Coquille, there were knights mobilizing with musical interludes from their trusty steeds, kings running for their lives and dramatic sword fights to the death. 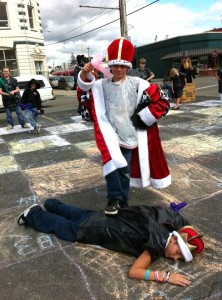 Loaned costumes were handed out and pawns were dressed in black or white garbage bags. With permanent markers, the garbage bags were labeled “I am a pawn”, “Coos County Celebrities” Dian Courtright of the Coquille Sentinel and John Gunther of the World were given cardboard boxes decorated by the CREATE art students to represent rooks. Coquille Police Chief Janice Blue wore a black sweatsuit and was given her Dollar Tree shield and balloon sword to become a simple pawn. Tim Novotny of KCBY was assisted into his Queen of Hearts dress and wig so he could represent the white queen. He was instructed to boldly cry out “off with their heads” as pieces are captured.

The first game was between arch rivals Jessi Ross, the lead board of the Coquille Varsity team and Shawn Putas, the lead board of the Marshfield Varsity team. They were the masters to move the living pieces. Misty Huffman was the chess board traffic cop making sure the pieces moved to the appropriate square. Pawns were the first to move and take control of the center. As Chief Blue was moved opposite Johnathon Huffman and they eyed each other, announcer Nancy Keller reminded Johnathon that he would not be arrested for assaulting a police officer if he had to capture her. Rapidly pawns were put to their dramatic fight and death scenes as they fought with their balloon swords valliantly. Brendon Thrash as “Dr. Remove the Captured Pieces” rolled the captured pieces off the board in a wheelchair as the “pieces” feigned grevious injuries. Many pieces had their chance to win emmy’s for dramatic death scenes but in the end, the king, represented by Tyler Overby, was captured and all the remaining pieces ganged up on him to send him onto his royal feigned death. Shawn Putas, the master of the board accepted the defeat from Jessi Ross. 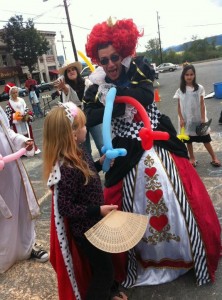 The second game was between the two best players of Coquille, Jessi Ross and Josiah Perkins who plays second board of the Coquille Junior Varsity team. Quickly the queens were put into action and first grader Mackenzie Collard had to take down the Queen of Hearts, now represented by John Gunther. Showing size does not matter in balloon sword fights (and with a little help from John impaling himself on her sword), John was defeated, arms and legs quivering in the air. CPR was attempted but Nancy Keller refused to perform mouth to mouth. He was rolled off the board. As pieces rapidly were sent to the captured piece box, Josiah raced his pawn represented by Devin Johnson to the other end of the board. As Devin was promoted, Sarai Perkins performed ceremonial taps to his shoulders with a plastic sword and awarded him a pink tiara as he became a queen. Then the king (Samantha Huffman) and queen (Devin) boxed the black king (Mason Collard) into the corner and Mason finally succumbed with many pieces helping him with his demise. Josiah had won the game.

Many of the “pieces” are heading to the All Stars Invitational only Chess tournament at the Salem Capitol building this Friday. To be invited, players had to place in the top ten for their grade during the last year. Coquille had twenty invited, Coos Bay had two and Myrtle Point had one.

November 5th, at the Coquille High School, Coquille will host an the Byron Massey Memorial Adult and Scholastic Chess Tournament. Everyone is invited. Chess practice is also every Tuesday nights from 5 to 8 at the Downtown Studio and is open to all ages including adults.

The Coquille Chess club is selling World’s Finest Candy Bars to help finance their many state competitions. The junior varsity team also have big plans to attend the K-9 Nationals once again in April. They won fourth place two years ago and have high hopes for getting first this year!

John Gunther (sports editor for The World) playing the rook is in the midst of defeat as Kaden Johnson playing the knight whittles him down with a balloon sword. 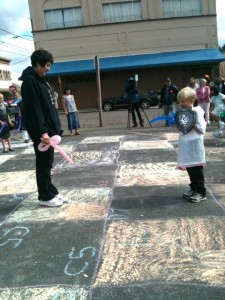 Coquille Police Chief Janice Blue appears to be intimidating second grader Johnathon Huffman as they face off as opposite pawns.