During the week I spent playing chess at National Elementary Championship at the Anatole Hilton in Dallas, Texas, I had a great time but it was a LONG tournament. Asian artwork covered the hallway walls and it felt like a museum. Outside, it looked like a park and it was very hot and humid. The campus was my favorite part of the tournament.

Each day, I met with Coach Emil and Coach Georgi along with my teammates from the Seattle area. In the team room, we played Bug House and Blitz chess and had team meetings everyday. Since we were playing G120, we had to play slowly and take our time. In between rounds, to relax I went to the pool, hung out with my friend Ava, watched TV, and my Dad made me take a naps and avoid junk food.

After I had won my first three games, I was really getting worried because I was about to play Minnesota’s 6th best chess player for 5th grade. After winning the game, I set a goal to win six out of seven. I won game 5 by checkmate and game 6 by resignation. I knew then that the 7th round would determine how I would place. If Board 1 had a draw, then I would win, I thought. I waited long hours for standings to be determined. 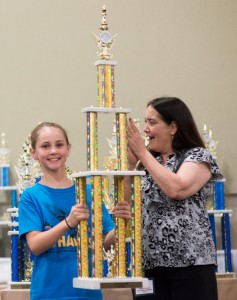 My friend’s mom pulled out her Samsung and pointed to 1st Place in my division. I saw my name. I had won! I was so happy and excited because I had never had a perfect score before and I didn’t expect my first nationals to be it! I came to Dallas to have fun and maybe win a small trophy. Never did I imagine that I would be going home with a 4′ trophy and a national championship!

I would recommend the Nationals to any chess player; after all, anything could happen.