All games were drawn today.

Kramnik-Carlsen, 1/2-1/2
Carlsen played the Chigorin defense to Kramnik’s Queen’s gambit. Kramnik gradually built up a solid positional advantage with a great supported passed pawn in the center, while Carlsen had a pair of passed pawns on the a- and b-files. As they say, “In the middle game, center pawns are better; in the endgame, outside passed pawns are better.” Advantage Kramnik. Later, when it looked like a sure Kramnik win, Carlsen tempted him into trading R + N for R + N. At first glance, it looks great for White — he’s up a bishop to a pawn. But the win was a difficult one, and Kramnik could not find the winning plan. Can you? 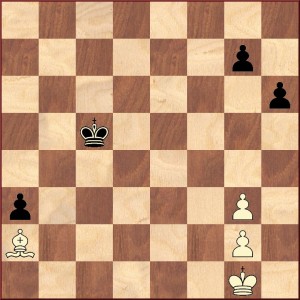 Kramnik-Carlsen. White to move. Can you find the winning plan?

Right now, the white bishop has to sit on the a2-g8 diagonal to keep an eye on black’s passed pawn, while the white king has to protect the two white pawns. If the white bishop and king could trade jobs, the king could actually capture the black a-pawn. None of this can happen, though, until the black pawns are frozen at g5 and h6. White needs to find a way to force black to move his pawn to g5. Kramnik was able to get Carlsen to move his g-pawn, but then Carlsen trapped Kramnik’s king in the corner for the draw. (Another possibility for white is to plop his king down on f4 while black’s king is well away from the backward white pawn. Then, white plays g5, forcing black to capture the pawn and clear a path for the white king or decline the capture, allowing white to move the pawn to g6, where it can be safely guarded by the bishop while the king marches to e6 and f7, where he can then grab the black pawn to allow his own pawn to promote.)

Short-Howell, 1/2-1/2
Nigel Short, who had four losses and only one draw in the past five games, decided to have some fun in the penultimate round and played the King’s Gambit against David Howell. White gives up the important f-pawn in the opening and weakens his kingside. To what end? A wide open game with great attacking chances for both sides. White starts out in a hole, but it virtually guarantees a fun game. Nigel figures that if he can’t win a game, he might as well play a wild opening just for fun.

McShane-Nakamura, 1/2-1/2
McShane played an offbeat move (1. g3) to start the game, but the players transposed into a more-or-less standard English opening after a few moves. The American Nakamura would move into the lead in the tournament standings with a win against McShane. He won a pawn and had a strong position, but McShane wiggled his queen into the heart of black’s camp to force a perpetual check. Draw!

Adams-Anand, 1/2-1/2
Anand played a Sicilian Najdorf against Adams. The Najdorf has a reputation for being one of the sharpest openings on planet earth. This time, though, neither player could apply any really pressure or gain an advantage, and the game ended in a quiet draw.

Standings going into Wednesday’s final round: