Wunderkind (wonder child) Magnus Carlsen goes down again — this time to world champion Anand. Carlsen just turned 20 a couple weeks ago. Just after his 19th birthday, he became the youngest player ever to be the number one rated player in the world (Jan 2010). The next world champion? Two months ago, it looked like he was on the inside track. He won several very strong tournaments in 2009 and 2010 and earned a spot in the Candidates Matches in spring 2011, with the winner to challenge Anand for the title. But he pulled out of the matches, saying that he didn’t feel motivated and that he’d rather see the world championship decided in a tournament rather than a challenge match.

In his game with Anand on Friday, Carlsen came out of the opening with a good advantage but threw it away on move 28. Then, with Rc2 on his 28th move, he would be losing if Anand could find the right way to proceed in the diagram: 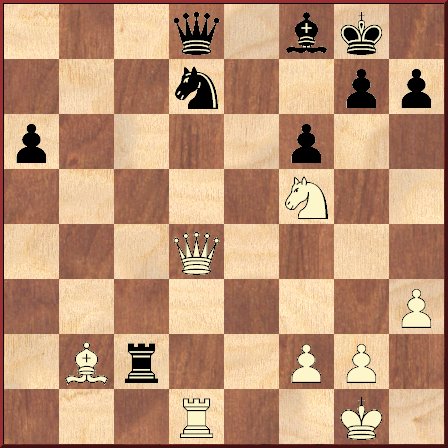 And, it is no surprise that Anand was able to solve this nice chess puzzle:
29 Nh6+ gxh6
30 Qg4+ Bg7
31 Qe6+ Kh8
32 Rxd7
The game continued for another 45 moves, but there was never much doubt about the final result after Anand’s nifty little combination to get the superior position.