A great round of ferocious, fighting chess by some of the strongest players in the world…

Anand-Nakamura, 1/2-1/2
Nakamura, the strongest player in the US and currently among the top ten in the world, had the dubious honor of playing black against World Champion Anand in the first round. He decided to play the Berlin Wall. White gets a slight advantage in the opening, but Black gets a solid position that is tough to beat. The opening was popular for awhile a hundred years ago, but no one really played very much again until Vladmir Kramnik dusted it off as a drawing weapon in his world championship match against Garry Kasparov in 2000. It’s curious that a dynamic attacking player like Nakamura would use a dull opening like the Berlin, but he’s new to top-level chess and is playing it safe. Anand was two pawns up but Nakamura’s wall was too strong to tear down. Said Nakamura after the game: “Pretty horrendously bad game against Anand today, but luckily the Berlin Wall is a forced draw!”

Adams-Howell, 1-0
Another Berlin! Unfortunately, Howell ignored Kramnik’s lessons from his match with Kasparov and tried playing an old-fashioned version. Adams sac’d two pawns and a knight and shredded him in a blistering attack against the king. 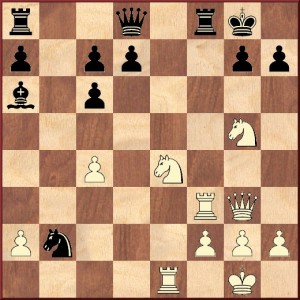 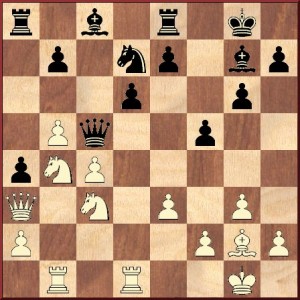 21. Nxa4! At first glance, it is not safe to take the pawn because the black rook pins the knight. Black will be able to immediately attack the knight a second time with his queen:
21. … Qa7 Now the knight is twice attacked and only once defended. Unfortunately, White doesn’t have any other defenders available for the knight, but McShane already had a clever defense figured out before he took the pawn:
22. Na6! A surprising and beautiful move. After Black captures the knight, White keeps moving his pieces forward and strangles the black pieces in the corner. White first wins a knight, then a pawn, and finally a rook for a knight. Game over.
.
.
.

Short-Kramnik, 0-1
Short played an old-fashioned bishop’s opening against Kramnik to try to throw him off. I think Short already knew this, but Kramnik is not the kind of player you can beat with cheap tricks. Short wanted to play a patient, strategic game, but Kramnik turned it into a swashbuckling, all-out assault on the white king. With checkmate looming over him in a few moves, Short resigned on move 38.