On August 4th — the hottest day in three years — many of Oregon’s most dedicated chess players gathered in Vancouver, WA, to begin play at the 113th Annual U.S. Open chess tournament. 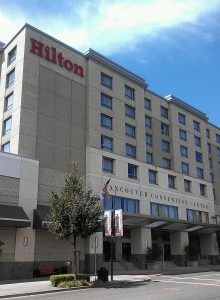 The vitality of the Northwest’s chess community was demonstrated by the U.S. Open Scholastic Tournament, which had 104 players registered — the same number as in Irvine, CA in 2010, but many more than in Orlando (33 players in 2011) and Indianapolis (35 players in 2009).  Some notable results for Oregon scholastic players in that event:

Congratulations to Seth Talyansky, who swept the field with 4.5/5 in the Elementary Championship Section, as well as to Andrea Botez and Marshal Xu, who ended with 3.5 in this highly competitive section.  In the HS/JHS Championship Section, no player was perfect, but on a day when 4.0/5 meant first place, the plus and even scores of Philip Weiss (3.0) and Grant Yu and Ethan Allison (2.5) were a good result.

In the HS/JHS U1200 section (that’s USCF U1200, not NWSRS), Jonathan Yau took a clear first place in light of his perfect 5.0 score.  Preston Fenimore (4.0) and Josiah Perkins and Benjamin Kleier (3.5) were close behind.  In the Elementary U1000 section, the best-placed Oregon players were Corbin Frias, who tied for first with a perfect 5.0, Gavin Zhang and Andre Klingler with 4.0, and Keshav Siddhartha and Aidan Garnder-O’Kearney with 3.5 points.

Some of our Oregon scholastic players chose to instead compete against the adults in the Weekend Swiss. Congratulations to Yogi Saputra and Takuma Sato-Duncan, who both had an excellent score of 4.0/5 and were just a half-point off the first place finishers.  Finally, we shouldn’t forget Oregon’s representatives at the Denker Tournament of HS Champions (Alexandra Botez) and the Barber Tournament of K-8 Champions (Aaron Grabinsky) who continue their competition through Tuesday afternoon.  Best of luck to both of them.

Well done to all the players, to the organizers, and to scholastic chess in the NW!