Eugene tournament sections used to be primarily grade-based, but this year sections but this year’s Winter Carnival had four ratings-based sections: Novice, Intermediate, Advanced, and Elite Eight.  There was a wide age distribution in the three lower sections, but with so many kids having ratings nowadays, there is little danger of terrible mismatches between, say, unknown high school student A vs. unknown primary school student B. Instead, we might have high school student A with a rating of 524 being perfectly safe to match up against 2nd grade student B with a rating of 582.

In many tournaments, there are a handful of players whose ratings are quite a bit higher than everyone else’s. If they are all lumped into the same section with much lower-rated players, then they end up playing only a couple of competitive games in a tournament, and the lower-rated don’t feel like they have any chance of winning. In recent years, the Eugene tournaments have had an Elite Eight (or Super Six) section comprised of the previous winner of the Advanced section and the seven highest-rated players (besides the Advanced qualifier).

The strength of the Elite Eight has been steadily increasing at an astounding average rate of 23 Elo points per event for the past 11 events. This year’s Winter Carnival was the strongest yet, with an average rating of 1549. 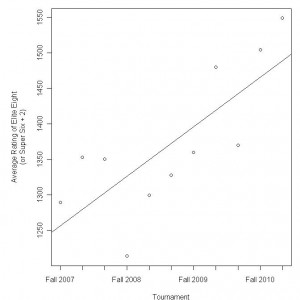 Average rating of the Elite Eight section at recent Eugene tournaments. (In cases where the top section was a Super Six, average rating shown is of the six players in the section plus the next two highest rated.)