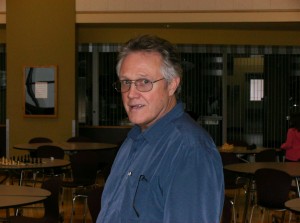 The name and format of the event has varied through the years, but on November 18 Jerry Ramey hosted his fall scholastic tournament for the 17th year in a row–a Fall Classic indeed. This year the 68 players were grouped into five separate playing sections.

Sectioning:The Elite Eight Solution.
A vexing issue in scholastic tournaments is that there are oftentimes a handful of players who are much stronger than the rest of the field. If the top section is large (< 20) or even moderately sized (12-16), the strong players destroy their early round opponents and don't meet each other until very late. They don't get a good challenge, and the less experienced players don't have much chance to win. Setting a high ratings cutoff for the top section is risky because but it is impossible to know how many higher-rated players will show up. Jerry has been experimenting with alternative solutions for a number of years. One idea is the "Fabulous Four"--pull out the top four players their own section to play a quad. But, alas, scholastic players are not fond of quads in an all-day tournament. That especially holds true in a smaller chess market like Eugene, where the top players would likely be friends from the same school or club and would prefer to play someone new in the tournaments. Another possibility is a "Super Six" section, comprised of the top six players in a round robin. Stronger players prefer longer time-controls than can be used for a five-round, one-day scholastic event. In addition, the round-robin format is not as popular among kids as Swiss pairings. In my experiments with a Super Six section, the day before a tournament, I would get a number of cancellations among the stronger players and some no-shows on tournament day. Jerry has settled into an Elite Eight section with the top seven players along with the winner of the advanced section in his previous tournament. He then runs a four-round Swiss at G/60. It seems to work fairly well at both attracting strong players and having competitive Elite and Advanced sections. Elite Eight Results
The Elite Eight section at Jerry’s tournaments tend to be among the strongest scholastic tournaments in the state. This year’s group included three of the top six scholastic players in the state–a Corvallis trio of David Wen, Max Sun, and Matt Dalthorp, all rated right around 1800–as well as strong local players Jack Dale (1528), Jimmy Kelly (1535), Derek Wang (1411), and Jeremy Guenza-Marcus (1240), winner of the advanced section in the Eugene Spring Fling. The field was complete with James Chen (1331) from Salem. Matt ended up winning the section with a score of 3.5/4 with good endgame play against Jimmy and Jack and with flashy attacks against James and Max. For his efforts, he brought home a beautiful trophy cup and a $100 check. Max ended up in clear second with 3/4 and $50, while Jimmy was third with 2.5/4 and $30. No ties!

Advanced Section Results
Cottage Grove Sophomore Henry Lancaster is a new-comer to the Advanced level and was the lowest-rated player in the section, but came up with a fantastic tournament performance, scoring 4.5/5 for sole first place. Tommy Case, a fifth grader at Ellis Parker Elementary in Eugene, finished in clear second at 4/5, while Kevin Zong (Roosevelt Middle School, Eugene) and Torrey Gage-Tomlinson (Pleasant Hill Elementary) tied for third and fourth.

Intermediate Section Results
While the Elite Eight results were a TD’s dream–no ties–the intermediate section was a nightmare. A three-way tie for 1st-3rd and a six-way tie for 4th-9th. Ai-yo! Jerry must be glad he went with computer tie-breaks this year instead of his customary blitz. I’ll let you look up the LONG list of names when the results are rated and posted at USCF and NWSRS.

Novice Section I Results
Hoover Elementary in Corvallis has a new chess club, and they made their presence known loud and clear at the Fall Classic. Last week Apollo Heo and Sewook Park played in their first tournament in Corvallis. This week, they tied for first with Eli Ablow-Measelle in the Novice I section at 4/5. Following close on their heels at 3.5/5 were Leo Reeves, playing his first tournament, and Victor Dossin.

Novice Section II Results
First place in the Novice II section was a brand new tournament player Wiley Peebles, who debuted with a perfect 5/5. Congratulations, Wiley! In clear second at 4/5 was Dakota Rockl of Delphian School in Sheridan. Another tournament first-timer, Yuh Hung, took third with 3.5/5.