It was a Sunny mid-December day, as all three Suns (father Bing and sons Max and Leo) put in great performances. By rating, fifth grader Max was in the middle of the pack at 1647 USCF (1702 NWSRS), but he ended up tied for third place at 3.5/5. He beat old-timer Harry Demarest in an entertaining Petroff’s defense — Harry’s favorite. You may be thinking, “The Petroff? Entertaining? What planet are you from?!” Standard Petroff may be dull, but Max played Cochrane’s gambit (1. e4 e5 2. Nf3 Nf6 3. Nxe5 d6 4. Nxf7) — a great psychological ploy against Petrov aficionados, who tend to relish stodgid* play. By sacrificing a knight for two pawns and a wide open position, Cochrane’s gambit is anything but stodgid. It may not be the most sound opening in the repertoire but it guarantees a lively game and forces Black to play well outside his or her comfort zone. With clever tactics in the center, Max overwhelmed Harry’s defenses, making the veteran look like a patzer. Nice job, Max.

When I submitted the results to USCF, I got a warning message about Leo Sun in response: “Possible Bad ID: Player’s performance rating is more than 500 points above his current rating.” HA! USCF obviously doesn’t know Leo very well, or they wouldn’t be surprised at his performance. This was a very tough tournament for a third grader, but after losing games to two players who were way higher rated (900 points USCF, 450 points NWSRS), Leo won against an evenly matched opponent and then drew against a much higher rated opponent in the final round.

Bing Sun, who is well-known in Oregon scholastic chess for his TDing work, proved himself to be a fine chess player too. In his first USCF-rated tournament, he earned an initial provisional rating of 1795.

One of Bing’s two losses was against 8th grader David Wen who finished the day tied for Max in third place.

12th grader Caleb Kesey was a 260 point underdog against Robert Hughes in the third round. He stumbled into an opening trap in a peculiar line of the French defense and lost his queen for a rook and knight. But Caleb has a steady mind and doesn’t get flustered easily. He kept fighting. In a chaotic time scramble, he pushed two passed pawns relentlessly up the board. By the time he got both pawns to the 7th rank, he had only 34 seconds left on his clock, but his opponent only had 2 seconds left. Caleb wins.

9th grader Matt Dalthorp faced tournament ratings favorite Jacob Reid (1898 USCF) in the first round. Jacob played the slightly off-beat Kupreichik variation of the Sicilian defense. Unfortunately for Jacob, he did not get castled fast enough and left Matt just enough time to launch a winning assault against the king. After black’s 12th move Bxg4, they arrived at the position in the diagram with white to move. 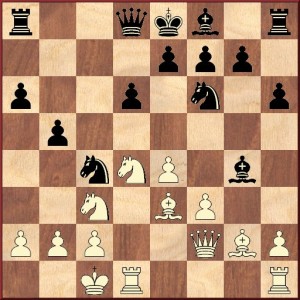 White to move and win

On his previous move Black had captured the g4 pawn, thinking that if white captured the bishop, he could recapture with his knight to fork the queen and bishop. Black would regain the piece and win two pawns to boot. But Matt found a winning line for white: e5! Black recaptures the pawn Nxe5, but this rips open the position when white is fully developed with his pieces aiming at the black king. Black is several moves behind in development, and his king is stuck in the middle. First the black bishop falls: 14. fxg4 Nxg4 15. Qe2 Nxe3 16. Qxe3. Now, White is threatening the rook on a8, so 16…Rb8. Completely winning here would be 17. Bc6+ Nxc6 18. Nxc6 Qb6 19. Qe4 etc, but good enough was what Matt played: 17. Qxe5 dxe5 18. Bc6+ Qd7 19. Bxd7+ Kxd7 20. Nxb5+. White is up a piece for two pawns but has the stronger position. However Black has a mass of passed pawns in the center, and many counter-chances. Matt ended up making a few inaccuracies in the endgame and lost in a heart-breaker.

* If “stodgid” is not a real word, it ought to be. It is an adjective describing Petrov’s defense as it’s intended to be — solid, but dull, drawish, and perhaps even stultifying.