Lisa Still hosted her 8th annual PE+ tournament on December 8. The first version in 2003 was called “PE+ Citywide” to distinguish it from a school “in-house” tournament. She soon had to drop “citywide” from the title because the event was attracting players from all over the state.

This year’s event was divided into seven small sections (small section = lots of trophies; PE+ is famous for abundant awards).

Kareem plays exciting, attacking chess. In the first round, he played the Sicilian Dragon against Matt. The dragon is one of the sharpest openings in existence, with great attacking chances for both sides. Matt responded with the ultra-sharp Yugoslav attack. Grandmaster Sam Collins says of Yugoslav attack: “Complex stuff. Someone is getting matied, but theory hasn’t quite decided who.” Bobby Fischer gives the formula: “pry open the KR file, sac, sac, mate,” which is precisely what Matt did. In his game against David, Kareem launched a wild, double-edge attack but couldn’t quite find a win. The best line available to him was a perpetual check, but he missed it. When the attack fizzled out, Kareem was down a rook, and David had little trouble converting his advantage to a win. It may not have worked out for Kareem this time, but with his no-holds-barred approach to fighting chess, he’ll have his share of great days too — and always his games will be exciting.

In the final round Matt and David played a line of the French Defense and tested some lines they discussed in chess club earlier in the week. The game was a wonderful validation of Tartakower’s maxim: “The winner of the game is the player who makes the next-to-last mistake.” Matt dropped a knight early in the middle game but kept on fighting. Later he made the second-last mistake, when dropped another piece as he was trying to set up a desperation attack. Then, the long-awaited attack was launched: Rb8+. Block with the bishop or move the king? David then made the last mistake: Kh7, and Matt finds checkmate in three.

James started the day lowest-rated player in the section by nearly 200 points USCF and nearly 150 points NWSRS, but he showed he is a true Force To Be Reckoned With. He played incredibly solid chess to beat Matt in the second round and then beat Kareem in the final round to earn a share of first place. In the process he improved his USCF rating by a whopping 169 points. Incredible performance. Warning to anyone who has to play James Chen in the future: Watch out! He’s a terror on the chessboard.

In the Advanced Section, Carson Denison (8th grade, Cheldelin Middle School in Corvallis), Brett Horton (8th grade, Delphian School in Sheridan), and Leo Sun (3rd grade, Hoover Elementary in Corvallis) shared first place with 2.5/3. Carson plays in the impressive Cheldelin Middle School chess club. Today he came out on top after beating local rival Ian Dickson (9th grade, CVHS). Leo is just in third grade, but he regularly thrashes opponents who are many years his senior. He’s perfectly comfortable in the Advanced Section and does enjoy being at the top of the standings. Brett is an up-and-coming leader on the up-and-coming Delphian squad. Picking up nearly 100 ratings points, he joins James as a Force To Be Reckoned With. 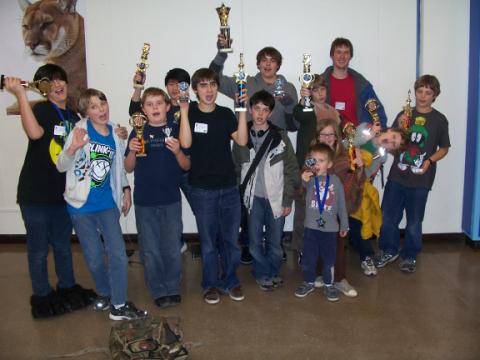 The Amazing Delphian Team Showing Off Their Hardware

In addition to section winners and individual performance trophies, a bunch of other awards were given out:

The Team Competition was extremely close, but was resolved as follows:
1st Place: Santa’s Elves 16 points and won the Delphian Playoff.
2nd Place : The Delphian Dratgons (16 points, but lost the blitz playoff)
3rd Place: The Knights of the Square Table with 15 points.
4th Place: The Flyin Sammiches from Delphian with 14.5 points.

Team Chess Pins were given to the members of the team with the best team name:
Knights of the Square Table — members Artemas Phillips from Franklin; Charlie Benning, Cole Schneidecker, Kevin Dai, and Leonardo Sun from Hoover, and Tanner Barlow from Jefferson.
Runner-up team names were the Flyin Sammiches and Santa’s Elves

A medal for the best T-shirt or Costume was given to Noah Costa-Bolton, mostly for the gorilla feet slippers.

Trophies for top grade level performances were given as follows: