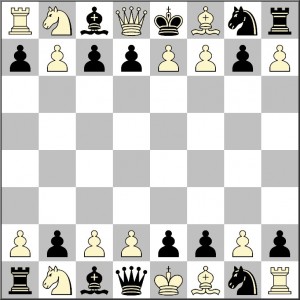 Snow fell over much of the state on Sunday night and Monday morning. The roads in Corvallis were completely iced over an hour before check-in for the 2012 Corvallis MLK chess tournament. Even so, players from as far as Seattle, Medford, Cottage Grove, Salem, all parts of Portland, Blodgett, Pleasant Hill, Eugene, etc. converged on Corvallis in record numbers for great chess.

Play was divided into eight sections. The top section was open to all (including adults) and players competed for sizable cash prizes ($150-90-60 for 1st-3rd and $50 for top U1700). The other seven sections were for K-12 players only and were defined by rating and age. Players competed for performance trophies (top four in each section), as well as trophies for Best Notation, Good Sportsmanship, and Best Handshake.

The Power Section was open to all, including adults. The top two active players in the state, Steve Breckenridge (2335) and Nick Raptis (2278) were joined by FIDE Master Corey Russell (2200), chess Expert Rob Fisette (2001), six players rated between 1800 and 2000, and fifteen others to play five rounds at G/45. Nick Raptis ended up winning with an undefeated 4.5/5.

The big scholastic stories of the day were the performances of Max Sun (1824, 6th grade, Corvallis) and Yogi Saputra (1424, 9th grade, Albany). Aside from his heartbreaking loss against Steve Breckenridge in the second round, Max won every single game he played to tie for second with Oregon’s highest-rated player and finish ahead of a FIDE Master Russell and an chess Expert Fisette.

A half point behind Max at 3.5/5 was Yogi Saputra. Yogi hadn’t played in a tournament in nearly a year and a half before playing at the Albany Open in December. In Albany he won clear first in the U1800 section, scoring 4.5/5. He picked up over 200 ratings points in the process and demonstrated that U1800 sections may be starting to be too easy for him. At Corvallis MLK he was eligible to play in the Mighty Rook Section (U1500) but chose to play up and test his mettle in the Power Section. He ended up tying with FIDE Master Russell, taking home the U1700 prize, and picking up another 200 ratings points to weigh in at 1620 with his first established USCF rating.

The Mighty Rook Section (1000-1499) was split into two smaller sections, primarily by age. In the Mighty Rook A section, Henry Lancaster (10th grade, Cottage Grove) won with a convincing 4/4. Henry played his first USCF-rated tournament last spring and got an initial provisional rating of 684. In three tournaments since November, he has boosted that number by over 500 points to 1197 by playing remarkably solid chess. Keep an eye on future All-Stars lists and the tops of tournament cross tables, and you’ll be sure to see this young man’s name again and again.

In the Mighty Rook B section, John Ornes (6th grade, Corvallis) won with an undefeated 3.5/4. John plays creative, interesting chess and has a great feel for the position. John picked up 300 points at the Elementary school nationals last spring, and it seems like he is on the verge of another breakthrough with great wins against much higher-rated players in Albany in December and in Eugene last weekend, and a solid performance in Corvallis on Monday.

The High-Energy B and C sections were played in the kindergarten room in the school. The small chairs may have been a little uncomfortable for the handful of fourth graders in the section, but they were good sports and played great chess with good cheer. Third-grader Andreu Martin (Corvallis) swept the High-Energy B section with perfect 5/5 score. Third-grader Fontaine McCullough (Corvallis) swept the High-Energy C section, playing in his very first tournament. [Interesting that four of the eight sections were won by third graders with perfect scores…]

An army of energetic and efficient volunteers made the day flow incredibly smoothly and pleasantly.

Concessions: Barb Berg and Donna Stream served hot dogs, pizza, chips, candy, fruit, soft drinks, coffee, donuts, etc. Based on turnout in prior years, they were planning for 100 players. When over 130 showed up, they handled the rush with grace and class.

Tournament Directors: Experienced, rock-solid TDs Jeff Risher (High-Energy B and C), Bing Sun (Good Knights), Max Booth (Mighty Rooks), and Lisa Still (Power) were joined by rising superstar TD Steve Cousineau (High-Energy A) to guide the players to their playing rooms and help get the first round started as close to on time as possible (a difficult task with the unavoidable snow delay) and with minimal disruption. Cassie Khavari helped Jeff in the High-Energy B/C room, while Erin Kooyman kept a close eye on the proceedings, knowing she’d be in charge of the room for the second half of the day. She was joined by Kristen Bishop in the afternoon, and the two made a great team, helping the youngest novices navigate the tournament. In the High-Energy A section, Steve Cousineau was scheduled to be TD for the first half of the day, but he was having so much fun, he decided to continue on until the end. Helping him was Corine Wehner, who was also enjoying the work and stayed past her originally scheduled time. Their replacements were to be two solid floor judges Nick Beleiciks and Shanthakumar Tyavanagimatt, who were able to help out as well. David Dai has been a reliable tournament volunteer for a year or so, and after working with Bing Sun for a couple rounds, he was ready to take sole charge of the large Good Knights room for the rest of the day–43 players! It was not easy, but he proved very capable and kept things running smoothly all afternoon. Steve Kleier relieved Max Booth in the Mighty Rooks room after the second round, and Dave Neiman relieved Steve late in the afternoon. Lisa Still and Bob Allyn were a dynamic duo in the Power Section, both of them playing and sharing floor judge duties. It was wonderful that these two highly dedicated chess parents were able to actually play in a tournament for once while their kids played in other rooms. Zane Kesey took over as floor judge in the last round. Bing Sun was the head go-to guy for blitz playoffs, which were numerous and complicated. He was joined by Jeff Risher, David Dai, Steve Cousineau, and I’m not sure who else. Excellent job! And Mighty Thanks! (And please forgive me if I’ve forgotten anyone.)

Trophy Prep: Diana Strand unpacked the trophies, carefully checked the inventory, added stickers to medals and 2nd place trophies, added engraving plates various “stray” trophies that needed to be inserted precisely into the trophy lineup, and arranged everything in a clear, logical, and attractive order–not a simple task with 82 trophies and 30 medals. Thanks, Diana!

Coaches: A large tournament like this cannot be run without the huge contributions from chess coaches. At the top of the list are Erin Kooyman (bringing 15 kids from Ashbrook AND serving as floor judge), Jeff Risher (bringing 12 kids all the way from Tigard AND serving as a floor judge), and Bing Sun (bringing 12 kids AND serving as floor judge and blitz coordinator). Zane Kesey (Pleasant Hill) and Michael Myers (Eugene) each brought a car load of high school players–not an easy task, but greatly appreciated. Forest Tomlinson brought around a half dozen players from Pleasant Hill. And, as always, Forest’s kids were disproportionately represented among the winners of Good Sportsmanship awards. Thank-you!

Parents: Huge thanks to parents. Sometimes chess tournaments seem to go on forever, but it is a wonderful activity for the kids, and your support is absolutely critical.

Setup: Alex Mueller-Warrant and Matt Dalthorp helped set up tables and playing rooms on Sunday night. Some of those tables are obnoxiously heavy and needed to be carried all the way from the back of the gym, into the school, and all the way down to the end of the hall. (Was it 17 tables that had to be moved great distances?) Thank-you! A number of people helped set up tables and chairs in the skittles room and others (Max Booth et al.) put pieces on chess boards in the playing rooms and board numbers next to the boards (Lisa Still, Steve Cousineau, et al.). Thank-you!

Clean-up: One minute, I looked at the tables and chairs scattered all over the skittles room near the end of tournament. I blinked, and the tables and chairs were all put away. Someone did an awful lot of work in a hurry. Dave Neiman and others helped put away chess pieces and boards. After the tournament was over, Matt Dalthorp stayed for several hours helping move tables and clean up in exchange for a late-night trip to Qdoba (fortunately, he got to sleep in because school was on two-hour delay due to weather). Muchas Gracias!

Full results for the Power Section and the Mighty Rook Sections can be found at USCF. Results for all sections are posted at NWSRS.