Eighteen players came to Corvallis on a scorching hot day to play some cool chess at Zion Lutheran School. All earned an enamel dog print pin while battling it out for the “full dog” trophies awarded to the top three finishers in each section. In addition to chess, players engaged in some basketball, dodge ball, video games, and celebration of Marjorie Sheiman’s birthday with cupcakes, grapes, and strawberries. Full results at NWSRS. 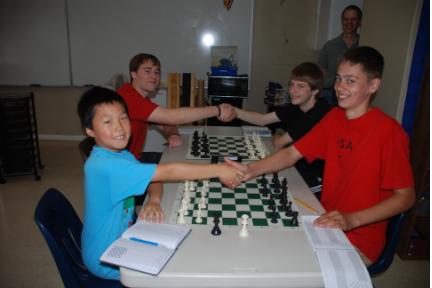 Marshall Xu, Alex Petersen, Matt Dalthorp, and Tucker Price played a double round-robin in the open section. Matt had a substantial rating advantage over the others and ended up with a perfect 6/6 after getting a scare in the final round against Marshall. Alex hadn’t played a single game in many months but showed little rust in scoring 3/6 for second place. Although much younger than the rest of the players in his section, Marshall was not at all intimidated and scored 2/6 for third place. After losing the final game and scoring only one point overall, Tucker was upbeat and pleasant and earned himself a “full dog” for Good Sportsmanship.

The six players in the advanced section, played a 5-round round robin. The results were as clear as possible: no ties for any place.
Casey Ford 5/5
Margie Sheiman 4/5
Alex Schoen 3/5
Grant Chen 2/5
Lance Roy 1/5
Andrew Sheiman 0/5 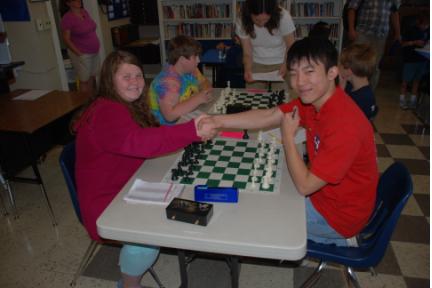 The intermediate section was a five-round Swiss with eight players. The day ended with high drama in the final round. Max Franklin had a perfect 4/4 going into the final round but he was slated to meet Jeff Wang (3/4) for first place. Max’s position fell apart early, and Jeff was able to clinch a tie for first by winning in short order. That left four players in contention for third place. Kevin Dai and Adrian Camero won their games early to finish at 3/5, while Fedor Semenov (2.5/4) played a long, close game against Atticus Crow (1/4). A win by Fedor would put him in clear 3rd, a draw would mean a three-way tie for third, and a loss would mean a tie for third between Kevin and Adrian. Fedor and Atticus played a well-balanced game and went into a rook and knight endgame with both players having several pawns. They traded off most of the pawns before Fedor won Atticus’ rook. Fedor then played like a grandmaster — confident and without hesitation — to checkmate with rook and king to win the final dog trophy.