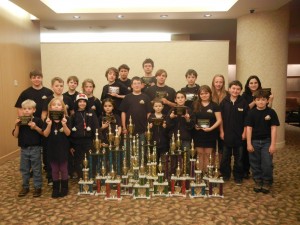 The trip started with a sixteen hour drive down to Stanton California the day before the event. Players met at 4 a.m. Friday to begin the trip. The adventure included one kid sick on highway 42, engine troubles on another vehicle, getting lost when mistakenly following a vehicle not in the carpool and navigating seven-lane highways in downtown Los Angeles. Eventually the 21 players and 8 chaperones arrived in the late evening exhausted and got a night of rest.

Saturday and Sunday were nine intense, rapid-paced games (each player was limited to 30 minutes only each per round) at the Hyatt Regency. Two of the K-9 players had a chance to play renowned Grand Master and former women’s world champion Susan Polgar’s son Tom Polgar-Shutzman (rated 2033). Sarai Perkins held her own but grew too nervous as Susan avidly watched. Eventually, she cracked and made a mistake, costing her the game. Aaron Grabinsky, however, earned a draw against him. Many of the players in the top sections were near Master level, so competition was tough. There was also an evening Blitz Tournament where players had only five minutes each to complete their game.

At the awards ceremony, the master of ceremonies was quickly corrected on how to pronounce Coquille and he got plenty of practice saying it as a total of twenty two trophies were awarded to the Coquille players and teams.

With a U-haul trailer (that had been rented for coolers of food, sleeping bags and luggage as all car pool seats were filled), they were able to transport all the trophies home. However there were more adventures for the trip home as one of the carpool vehicles blew an engine, fortunately only 3 hours from home. Transportation from home was recruited and the kids are all now safely home, exhausted but proud.

Full results for the G/30s are posted at USCF.

Blitz results are also at USCF.