Kids eyes bulged when they saw the beautiful trophies that Oregon First Community Credit Union had donated for the Coquille Scholastic and Adult Chess Tournament on February 26. Kids had come for different reasons to this tournament but they were definitely excited about the trophies. Some were preparing for upcoming State team competitions while others were trying to qualify for OSCF Seaside State individuals championships. 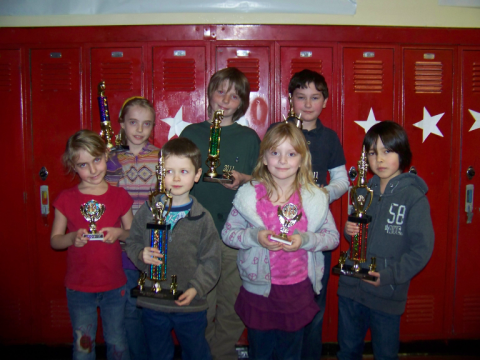 In the elementary section, Coquille’s second grader, Joshua Grabinsky, and Bandon’s fourth grader, Marino Santoro, fought it out once again for the top slot. This time Joshua managed to beat out Marino for the first place trophy, with Marino winning second. Members of Coquille’s Elementary Team came for practice and to fight out for board positions on the team. JJ Newman won third place, Samantha Huffman won fourth place and Dustin Neuwirth won fifth place. Although Joshua Grabinsky would be a worthy member of the Coquille elementary team, the rules are that all team members must be students of the same school building and with Coquille’s K-2nd graders in Lincoln, he is unable to go this year. However, he will most likely be on the team next year. Josiah Perkins is first board of Coquille’s elementary team but his strength put him in the elite division where he tied for first place with Joshua’s older brother Aaron Grabrinsky. They split the $60 cash prize for first place. Aaron Grabinsky is first board for Coquille’s middle school team demonstrating superior strength will be on first board for both teams. Kaden Johnson, the middle school alternate won second place in the elite division also earning a cash prize. 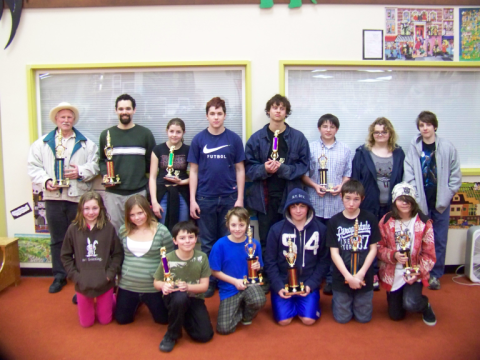 Coquille is sending a boatload of players to CFS in Portland and OHSCTA in Sherwood. To fund these trips, the Coquille Chess Club put on a very successful Mexican Dinner Fundraiser that same evening. Some of the chess team members forfeited their last games so they could prepare the fundraiser which was a full house. Food and raffle items were generously donated by the community and $5 tickets for a delicious dinner were a big hit for the community.