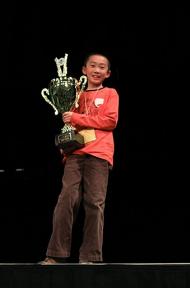 It’s February…time to start thinking about the OSCF State Chess Championships. This year the Championships will again be held in the beautiful resort town of Seaside, Oregon–our fifth straight year at this site. We are expecting a record 300 players this year for the main tournament on Saturday, April 28.

The OSCF State Championship is the premier scholastic chess tournament in the state, a two-day chess extravaganza. Before the main event on Saturday, the 300 or so participants get a chance to unwind with the chaotic but fun blitz and bughouse tournaments late Friday afternoon. On Saturday morning players are divided into fifteen different playing sections defined by age and skill level to compete for large, heavy trophy cups filled with delicious, fresh salt-water taffy made right in Seaside. [NOTE: The most advanced players in high school and middle school get long time-controls and begin play late Friday morning. All others play all their games on Saturday.]

Special Notice For Strong HS And MS Players
This year the U.S. Open Chess tournament will be held in Vancouver, WA, August 4-12. The Denker Tournament of High School Champions and the Barber Tournament of K-8 Champions will be held at the same site, August 4-7. Each state nominates only one HS player and one K-8 player to represent them in the Denker and Barber, respectively. Oregon’s representatives will be the winners of the HS Elite and MS Elite sections at Seaside. In addition to the honor of representing their state in a prestigious national event, Denker and Barber participants compete for generous prizes and scholarships and get 50% off their entry fee for the U.S. Open.